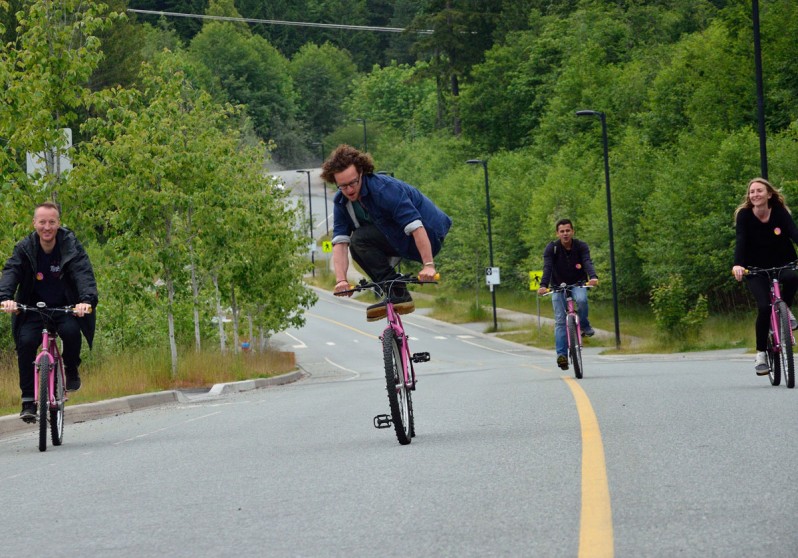 Jonathan Luckhurst is an Canadian photographic artist from Edmonton, Alberta. Vancouver Biennale International Residency artists have been  taking over our blog this summer and now that the residency in Squamish is complete, Jonathan is ready to share the inspiration and process behind his project with you. This Residency is my first, and it’s the first time I’ve incorporated a new medium into my work (analog projections). My imagery focuses on the utilitarian environment; I see the utilitarian construction as the most extreme example of the nature / urban split. I’ve worked with blocks and cubes, (of my own build), to create very utilitarian “landscapes”. I photograph these “landscapes” and then project these photographs onto the surrounding environment. The projections themselves are then photographed and abstracted in the darkroom. The final step is to mount the photographs onto salvaged Douglas fir panels.

If it sounds like a confusing process, that’s because it is! It is an extremely layered one, where each step is as equally important as the rest in creating the desired result.

In terms of the installation of the panels in the public realm, I first contemplated a guerilla style install. This was inspired by a very personal experience I had last February. I was invited to stay on Fort McKay First Nations Land in Northern Alberta, along with a biologist-researcher friend from the University of Alberta. Fort McKay First Nations had requested a 20km buffer between future oilsands SAG-D sites and their traditional hunting and fishing grounds; the Government of Alberta refused their request and has instead decided to provide an 800m buffer. This display of disregard for First Nations as well as for the land upon which we are so dependent left me angry and frustrated. My idea for a guerilla install was intended to mirror the arrogance and presumptuous attitude of Government and Industry, in this particular situation.

After some more thought, I have opted for a more diplomatic approach so that the installation itself will have more longevity. We are hoping to have my 3 large scale panels installed in Shannon Falls Provincial Park. The aim is to have the free standing panels installed right along the edge of the river that flows down from the Falls, (without any impact on the environment). For me, this site is representative of the border separating the human made, manicured environment and the natural environment. It was very important to find such a location, which would ultimately speak to the work itself.

As a globalized society, we face many challenges in balancing our needs and against those of nature. My hope is that the work can in
some way contribute to respectful and open dialogue around this issue.

Connect with Jonathan on social media

The Vancouver Biennale International Artists Residency program is supported by Quest University. The artists who are selected to participate are rising stars in their own countries. The artists are required to involve the  community in Squamish in the realization of their projects. This program brings artists together in dialogue and builds lasting connections between the artists and the local community.