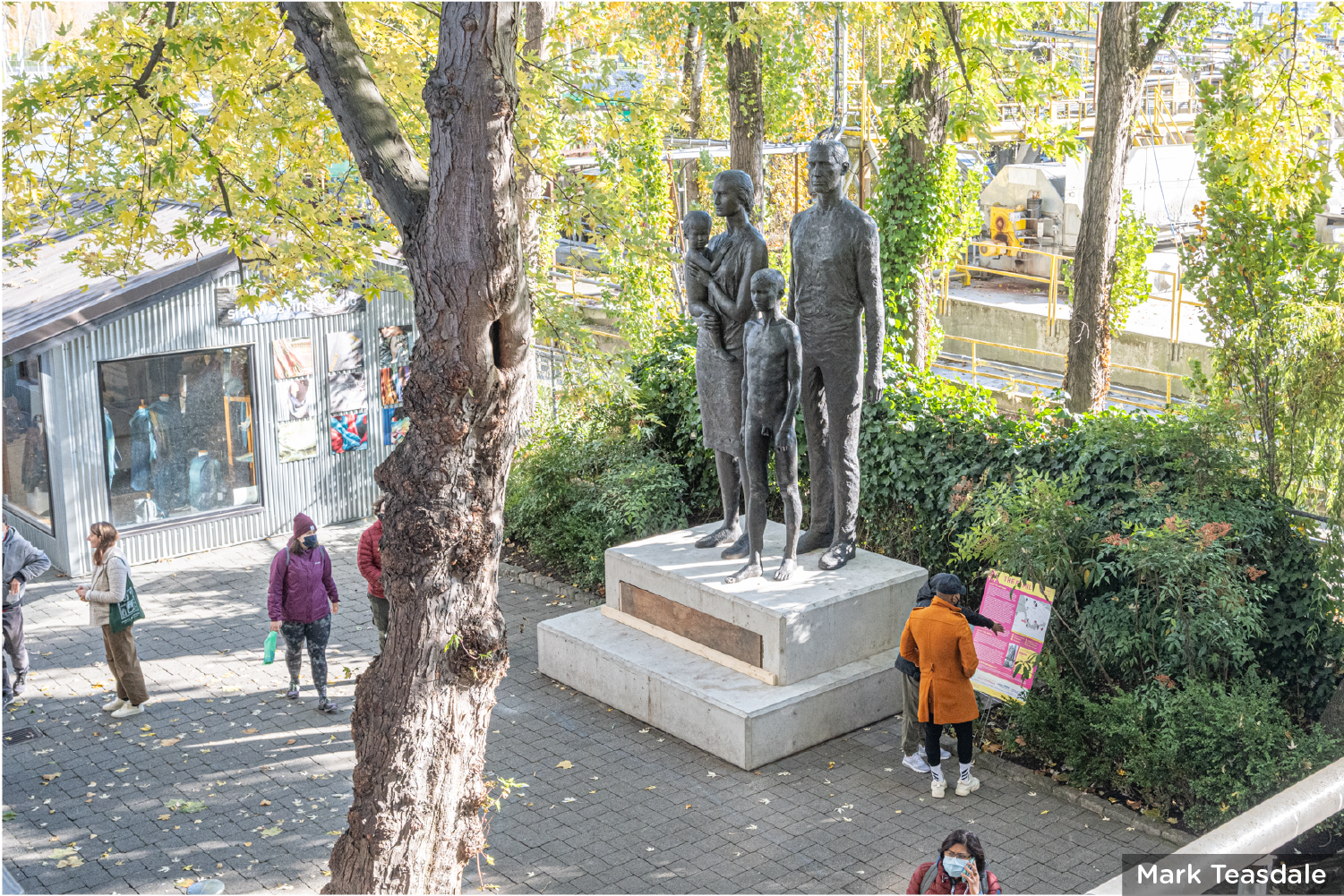 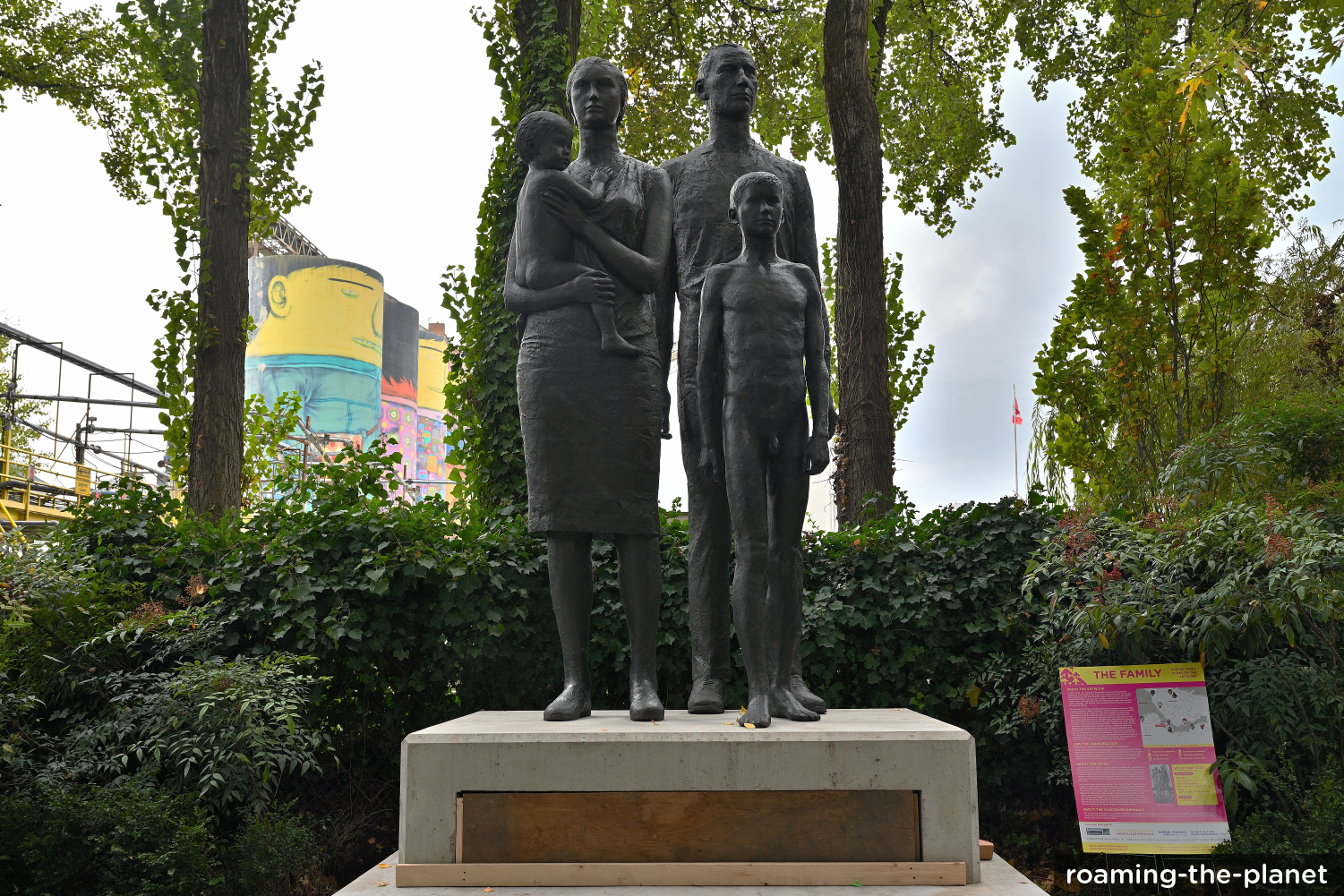 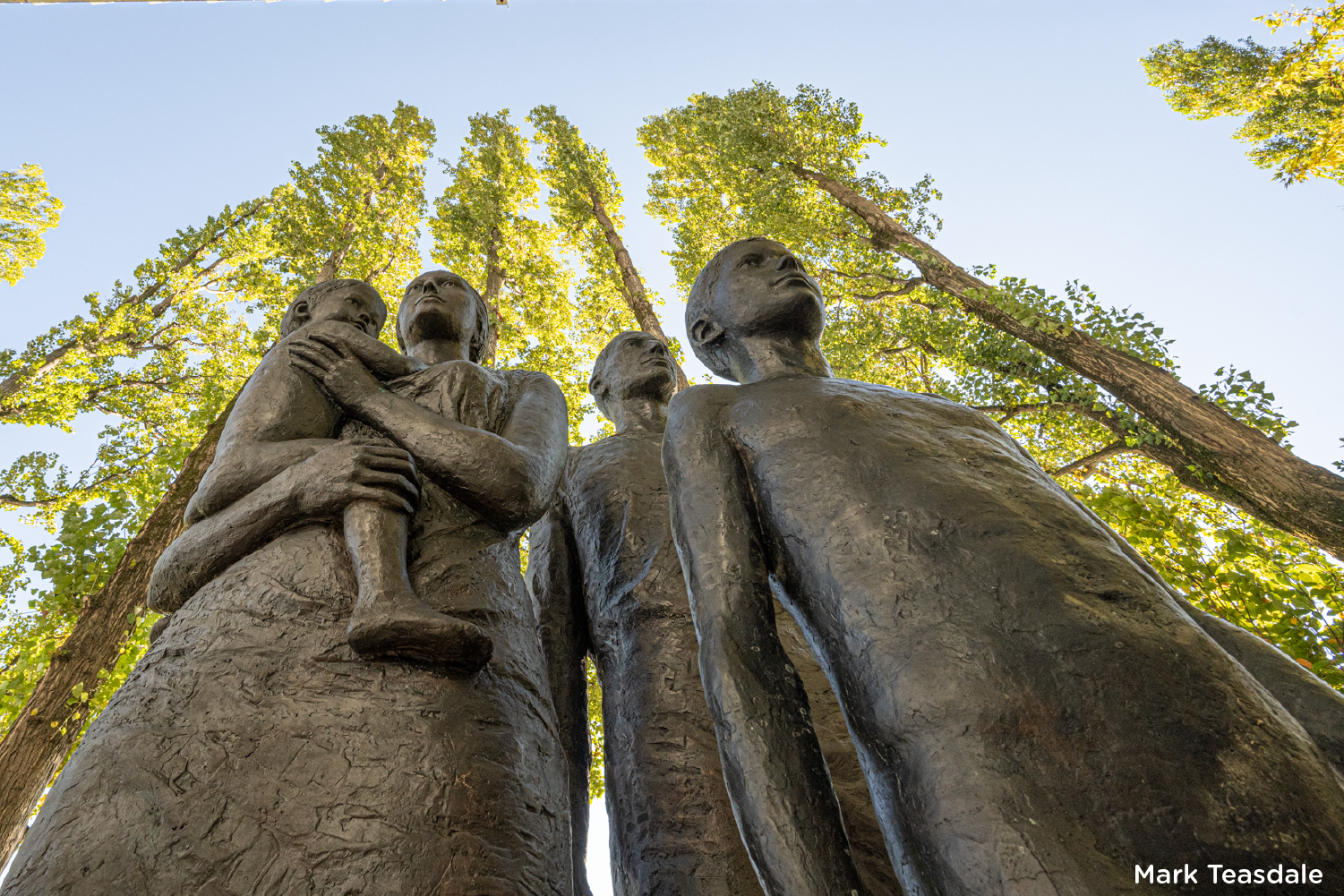 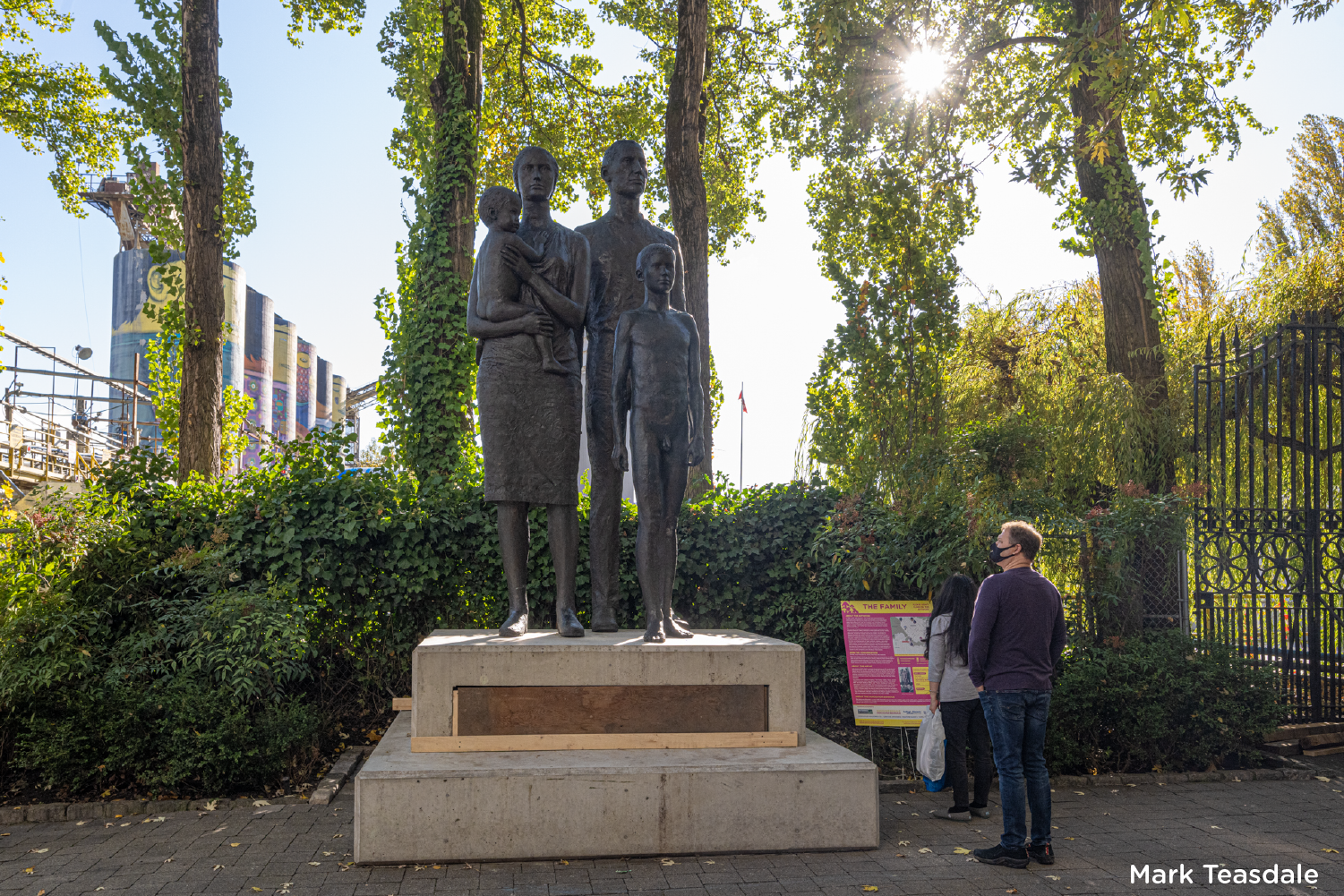 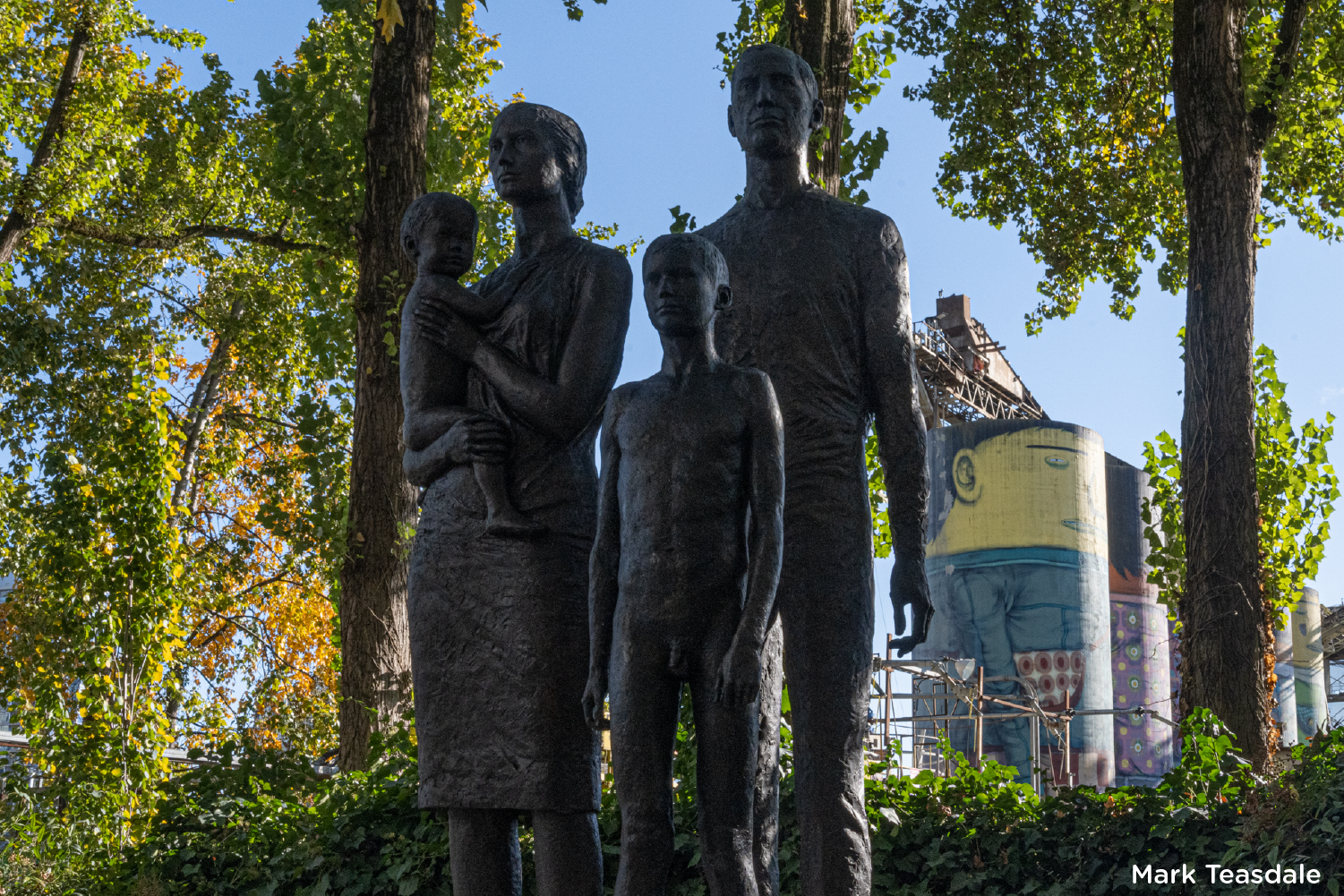 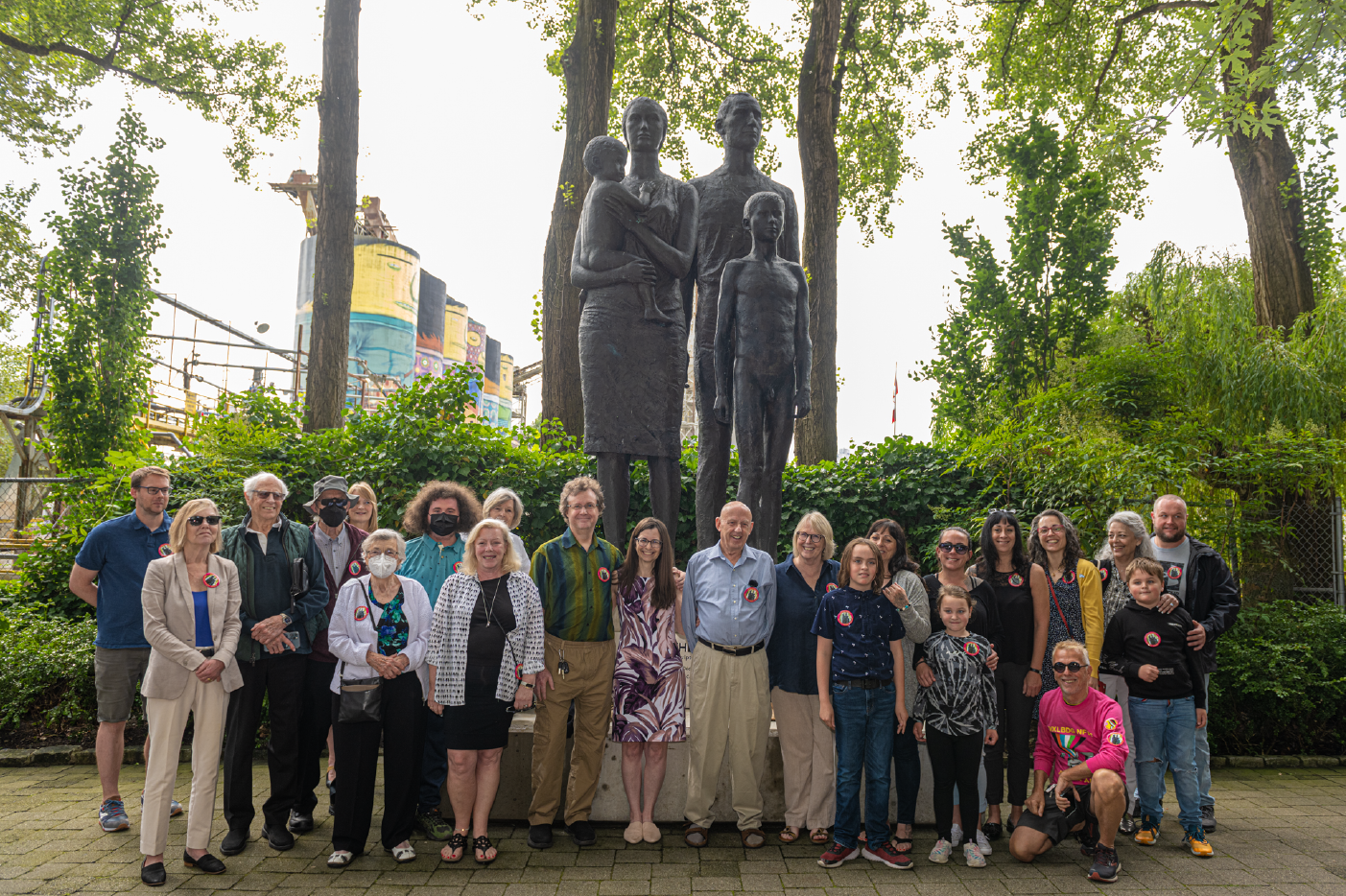 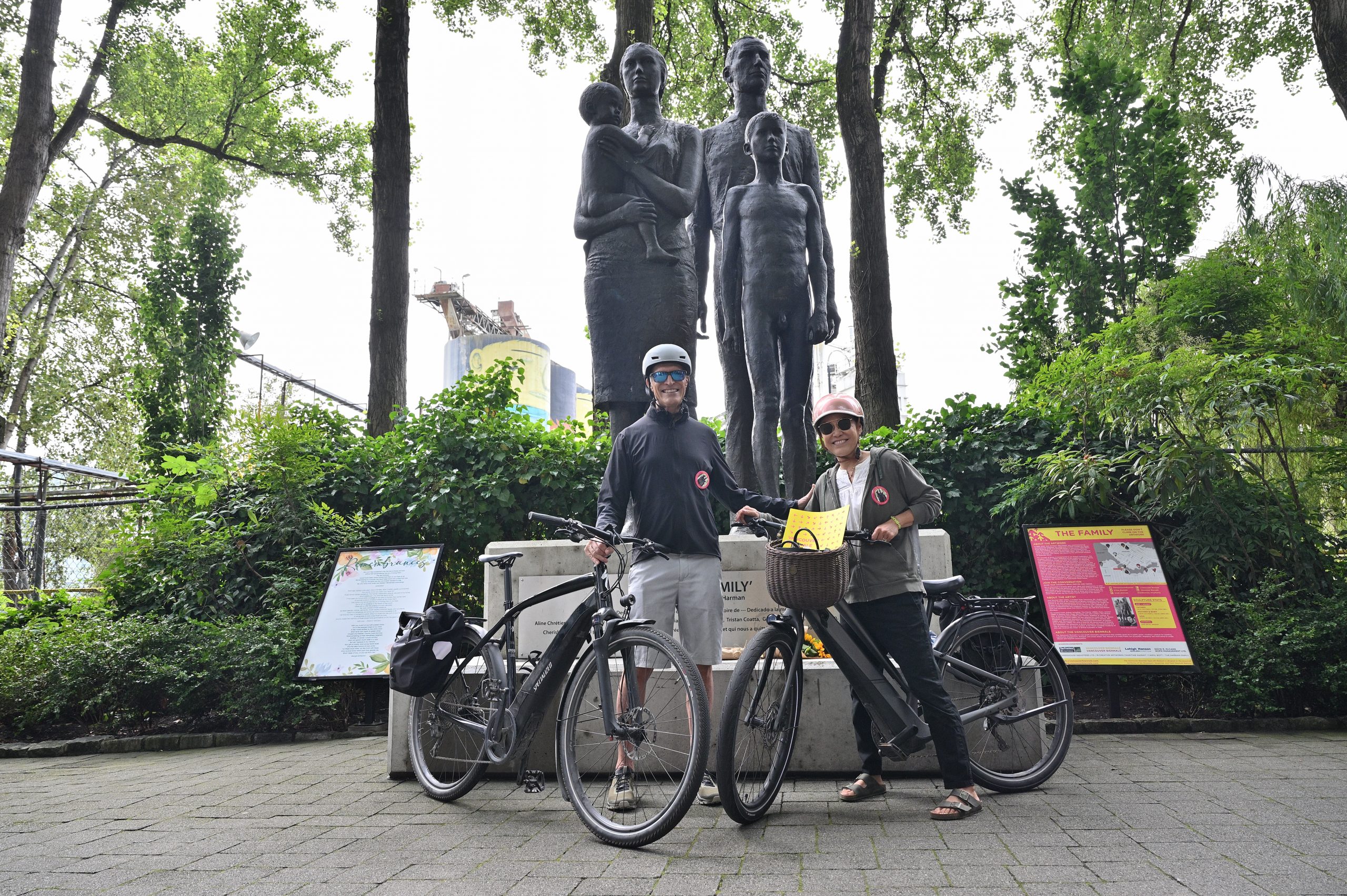 UPDATE July 2022:  The Family was officially unveiled at a ceremony held by Creekhouse Industries on Granville Island on Saturday, July 9: The Vancouver Biennale is pleased to facilitate the transfer of Jack Harman’s THE FAMILY sculpture from the Vancouver Biennale Charitable Foundation to CMHC Granville Island to ensure the artwork’s legacy and permanence.We applaud the tenacity of David McCann of Creekhouse Industries for overseeing and enabling the transfer to ensure its reinstallation.

In 1966, artist Jack Harman’s The Family was commissioned by Vancouver Sun publisher Stu Keate and installed outside the Pacific Press Building at 6th and Granville Street in Vancouver (1966-1997). When the building was sold, the sculpture was reinstalled at the Pacific Press printing plant in Surrey (1997-2015). Now, after several years in storage, The Family has moved to this permanent location on Granville Island.

The concept of family is fundamental to our human experience. This sculpture depicts a 1960s definition of the traditional nuclear family, with a heterosexual couple and their two children. An idealized depiction, except the teenage boy has no clothes. According to Stephen Harman, the artist’s son, the naked boy represents “a new generation stepping forward, shedding the metaphorical baggage of the past.” Might that baggage be the very definition of family itself? In the decades since the sculpture’s debut, what constitutes a family has been an ongoing topic of legal, political, religious, and social debate. Laws governing marriage and civil unions, adoption and child custody, access to healthcare benefits and financial resources have all changed to reflect more expansive views on the family and the diversity of people living within those units. The Family by Jack Harman is a permanent legacy installation, gifted in perpetuity to the people of Canada by the companies and individuals listed below.

Harman created iconic sculptures including The Family (1966); Harry Jerome (1986) in Stanley Park; Roger Bannister and John Landy’s The Miracle Mile at Empire Stadium (1967); and Themis, Goddess of Justice at Vancouver Law Courts (1982). He was selected to create The Queen Elizabeth II Equestrian Monument on Parliament Hill in Ottawa, Ontario (1992) and Reconciliation: The Peacekeeping Monument on Sussex Drive in Ottawa (1992). His work is held by the Government of Ontario Art Collection, the University of British Columbia, the City of Nanaimo, and the City of Vancouver. He was a member of the Royal Canadian Academy of Arts and received the Order of British Columbia in 1996.

We’re interested in hearing about your ideas and experiences. In what ways do you think the definition of family relates to basic human rights? How would you describe your family, and how has your family evolved over the generations? What challenges do you or those you know continue to have? How do you see the modern family evolving in the future? Let us know on any of our social media channels (and please remember to use our hashtag, #VanBiennale).