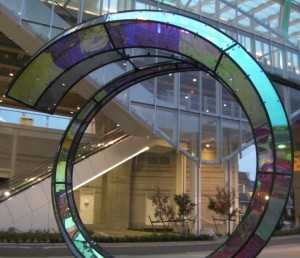 Vancouver Biennale is proud to announce the installation of a new sculpture by Dennis Oppenheim entitled Arriving Home.  You can find this piece at the International Arrivals Terminal at the Vancouver International Airport.

The Vancouver Biennale has showcased 2 other amazing pieces by Dennis Oppenheim in the past – The Device to Root Out Evil and the Engagement Rings. 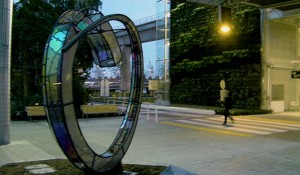 arrival and Departure: An Endless Spiral.  Photo by Sean Cranbury.

Departure and arrival, as well as the freedom and the exhilaration of travel and mobility are crystallized in the rhythmic movement in this circular sculpture created by one of the most influential, innovative and respected artists working today.

His two installations in the 2005-2007 Vancouver Biennale, ‘Device to Root Out Evil’ and ‘Engagement’ were two of the most popular and controversial installations. “Engagement“ was acquired by the Biennale as a Legacy work.

The circular form of “Arriving Home” suggests movement and mimics the rhythms of traveling. Both departure and arrival are crystallized in this metallic spiral by renown American artist Dennis Oppenheim. Perfectly positioned at the YVR International Airport arrivals terminal, a site of “Transit-ion”, the theme of the 2009-2011 Vancouver Biennale, the sculpture suggests the freedom and the exhilaration of travel and mobility.

The sculpture stands as a greeting to travellers as they come and go.

Constructed out of steel and lexan acrylic, the spiralling iridescent multi-coloured form looks alive and as though it is about to spin and move through space.

Oppenheim continues to be an influential figure in contemporary art.

He has received international attention for his conceptual work in the sixties, and later for his body or art, video, photography and performance work. His current work in large-scale outdoor sculpture installations has garnered international acclaim.

Dennis Oppenheim was awarded a Lifetime Achievement award in 2007 by the Vancouver Biennale.