Public Art: Transforms Our Cities. Shapes our Imagination of the Possible 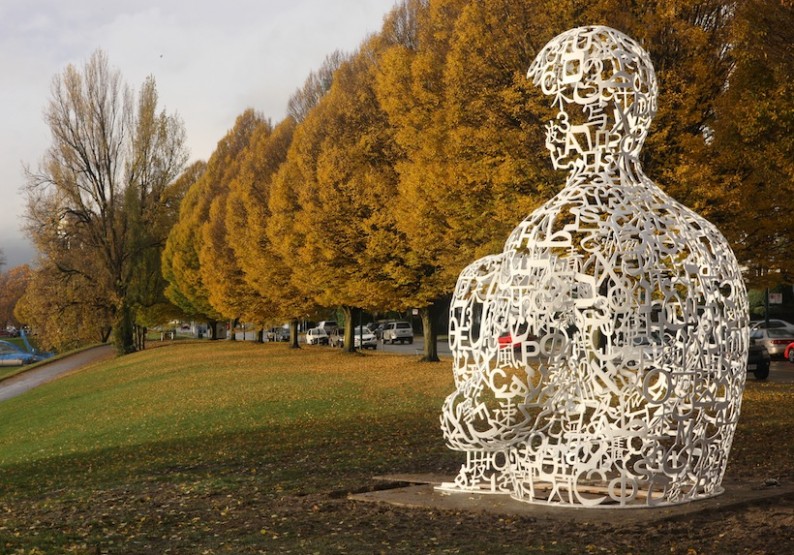 A West Van police officer shone his flashlight on me with suspicion through the frost fencing and wanted to know what I was doing parking my car and loitering on this vacant gas station lot so late at night. I explained that earlier that day Grosvenor, the development company I was working for, had taken possession of the property at Marine Drive and 13th Street. The vendor had taken everything from the site, including the locks on the metal gates that now swung wide open. Passing by, I thought I would investigate and walk the site a little before securing the gate. I handed him my business card and told him I was thinking of what to do with the property. Shortly after, while walking the site and taking in its waterfront location, I had a public art epiphany. 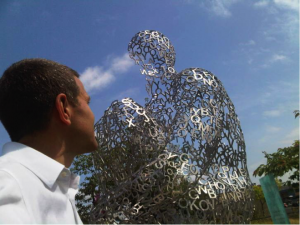 For 14 years the gravelled, remediated gas station site had been a depressing gateway to West Vancouver’s Ambleside neighbourhood. That night I decided to do something immediately about the situation. I wanted to do something that allowed people to enjoy the site while drawing attention to the fact that the entire block was a waterfront site – one that West Vancouver had turned its back on for decades. And, importantly, I wanted to demonstrate that positive development and a bit of creativity could remedy that situation in a short period of time.

Barrie Mowatt, founder of the Vancouver Biennale accepted my call the first thing the next morning and greeted me at his Buschlen Mowatt Gallery with a hot coffee. I presented Barrie with an idea and a question: could we use one of his sculptures to create a temporary art greenway on the Ambleside site? It was a fortuitous meeting because he was moving his gallery and was looking for a temporary home for a beautiful sculpture by the celebrated Spanish artist Jaume Plensa. Thus began a great relationship with Barrie’s Biennale organization, and a major role for art, and artists, in the public consciousness and planning for the 1300 Block of Marine Drive.

In the month that followed, our architect James Cheng collaborated with landscape architect Chris Phillips at PFS Studios to create a greenway linking the Marine Drive frontage to Bellevue and the waterfront beyond. The team designed a concrete plinth with lighting for the Plensa, a pea gravel walk, and we made good use of the allée of existing cherry trees.

Barrie also suggested at the time that we talk to the Australian artist Konstantin Dimopoulos who was setting out to install his “Blue Trees” in sites around the world in 2011 in honour of the United Nations International Year of Forests. Kon kindly agreed to an installation at the south end of our greenway where we readied some young maple trees for his special electric blue non-toxic paint. 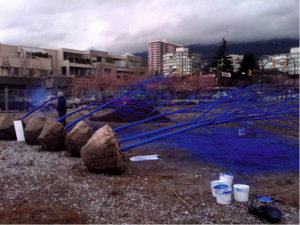 Our team removed the ugly site fencing and installed lighting, benches and bike racks to encourage people to linger a bit. We also installed a sign that said “Welcome back to the waterfront”. Within weeks, we had transformed the vacant gravelled gas station site into a public amenity.

The day after we laid the sod, I snapped a picture of a mother enjoying a relaxing moment with her child. In the weeks that followed, the Blue Trees bloomed green and I often took the time to sit and watch people’s reactions as they passed by for the first time along the Bellevue waterfront promenade. Laughter and smiles! Some people double checked their vision. Many reached out to touch the beautiful sculpture. All took in the new view of the waterfront. 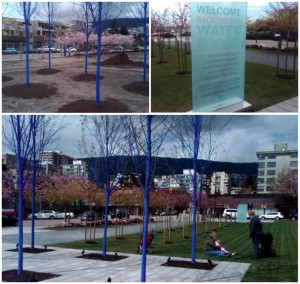 Art and Artists in Public Process are Transformative

A significant effect of our investment in public art and placemaking – even on a temporary basis – was that it drew people from the local arts community directly into our planning process. I have said this many times, but artists are natural transformers who take raw material and create fantastic new things that people often could not have imagined in the first place.  They are essential in placemaking and city building. Over 2011-2013, our design team partnered with Co-Design facilitator Stanley King to partner with a diverse array of people the community to make them artists in the creation of a new block. In this effort we were supported by celebrated local artists like Douglas Coupland and Gordon Smith, by notable West Vancouver designers, architects and landscape architects, and by local businesses and local residents.

The Public Art and Temporary Art Greenway on the 1300 Block of Marine Drive generated enormous public goodwill and our partnership with Barrie Mowatt and the Vancouver Biennale was an important factor in that win for the community and the ultimate success of the development, the final design of which features significant permanent public art and exceptional urban design.