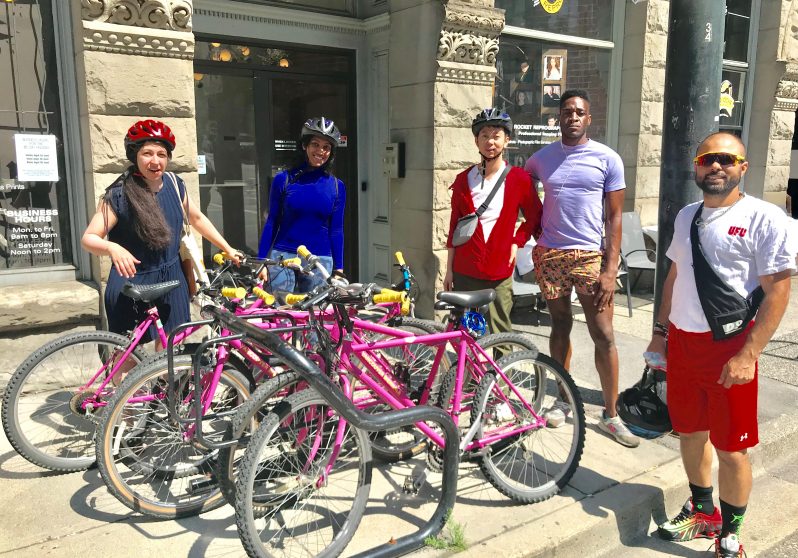 During the Vancouver Biennale’s summer 2019 International Residency Program, the four artists-in-residence disrupted and expanded conventional understandings of public space by challenging assumptions about what constitutes a public space and how designated public spaces are actually used. As one might have expected, each of the artists chose to approach the 2018  – 2020 Vancouver Biennale exhibition theme of “re-IMAGE-n-ing public space” from a different angle.

During the six-week residency period, Tao Hui (b. 1987, China) explored the ideas of aural public space and private headspaces. 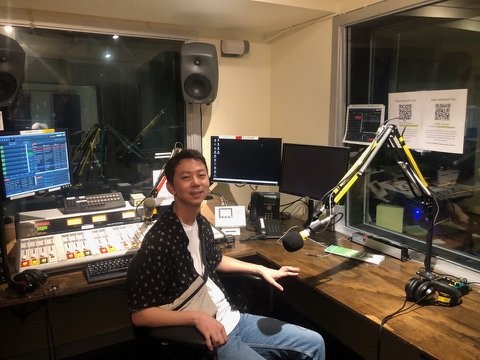 While working on the audio sculpture I Asked the Air to Be the Postman, Tao wondered how the space created through a story is perceived and altered by the story’s audience. “The image and imagination change as I pass them through a radio wave.”

Meanwhile, Mamali Shafahi (b. 1982, Iran) was questioning how to involve Vancouver public spaces in the realms of virtual reality (VR) and augmented reality (AR), which are normally regarded as enclosed private experiences. Intrigued by the private ways that viewers make meaning for themselves, he employed art to bring VR/AR into the public space with an intention to interrupt cultural norms about what is considered taboo and, therefore, inappropriate for public consumption. 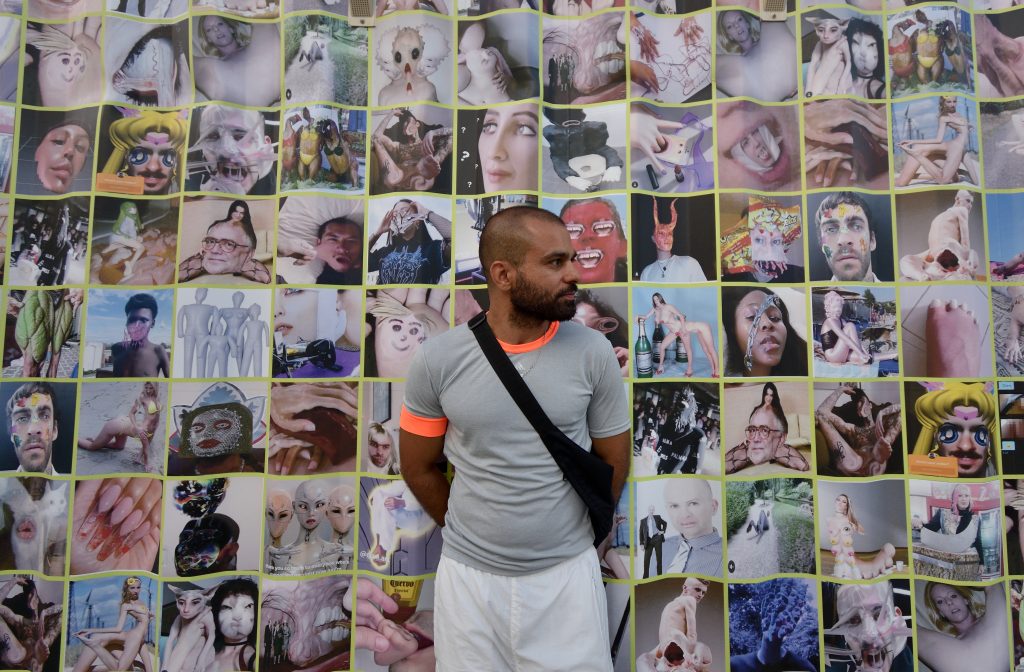 Through engagement with Mamali’s Nerd_Funk project, viewers had an opportunity to explore how the internet, mass media, and open-source platforming are challenging a dichotomy between public and private space.

In her art practice, Nathalie Quagliotto (b. 1984, Canada) shares Mamali’s interest in challenging our ideas of public space. By taking the art out of a gallery context, she aims to provoke the unexpected through social practices that invite community members directly into the art. 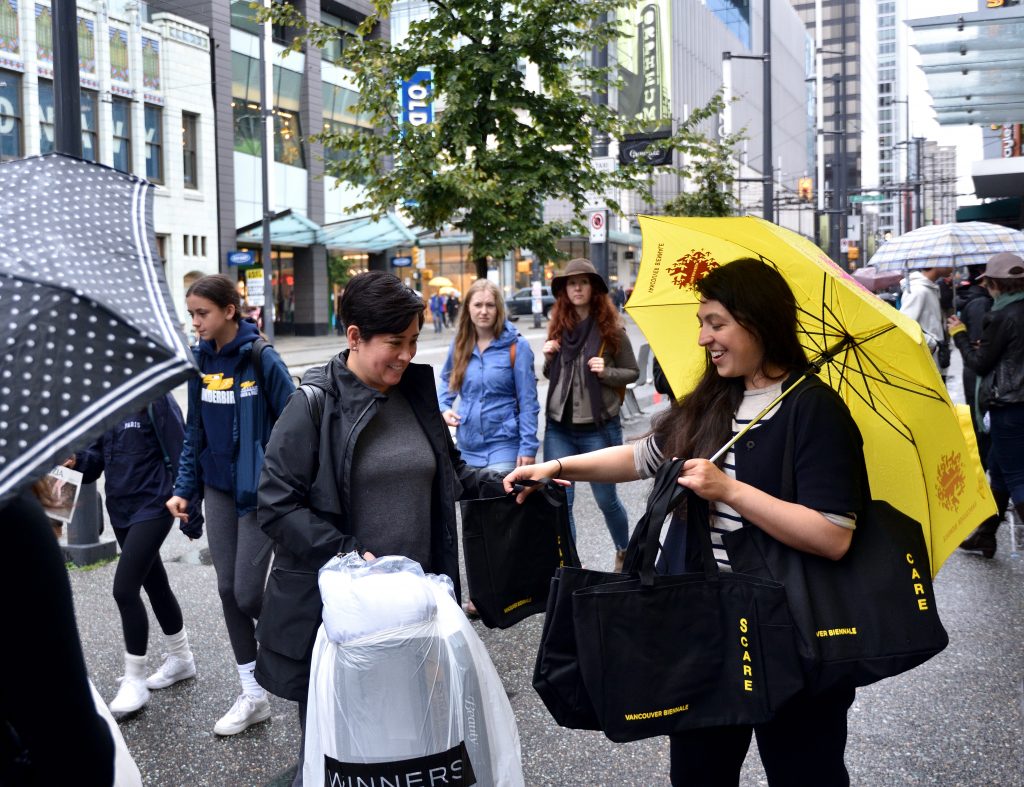 Her approach is to bring elements of confusion and play into the public space to refocus attention on the space itself. Nathalie alters everyday objects and familiar places to make a space feel unfamiliar and force a new kind of participation in the space. For her Vancouver Biennale residency project, a pop-up intervention called Carry Yourself, she handed out 140 tote bags to random people during two walk-throughs of a downtown Vancouver street. The tote bags, which read SCARE on one side and CARE on the other, addressed problematic social encounters of the public in downtown settings. While wearing or carrying the bag, people may choose which side they wanted to show to others.

Impacted by the Indian Act, the Truth and Reconciliation Commission of Canada, and extensive public dialogue, Carlos Martiel (b. 1989, Cuba) was another artist-in-residence interested in questioning how public space is used. His two performance pieces occurred in two very different settings, both on unceded territories. For his first performance, Under Occupation, Carlos chose a Vancouver waterfront site, Hinge Park, whereas Statute, his second performance work, took place on the north plaza of the Vancouver Art Gallery (the former site of the Vancouver courthouse) in šxʷƛ̓ənəq Xwtl’e7énḵ Square. 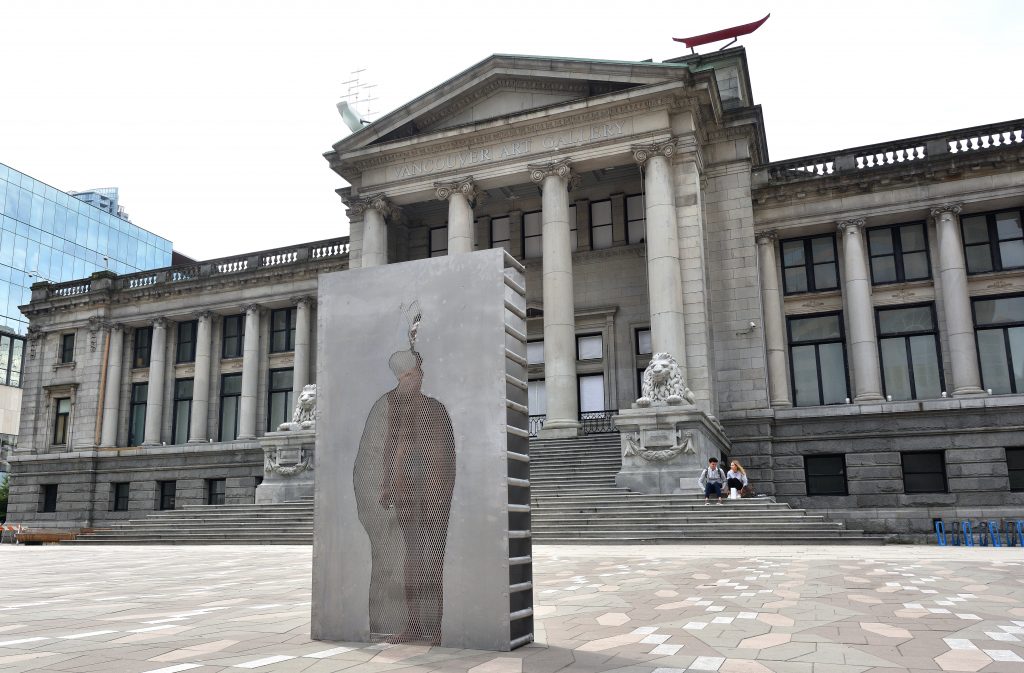 In each setting, Carlos provoked attendees to reflect on Indigenous histories and use of public spaces.

Each of the Vancouver Biennale’s summer 2019 artists-in-residence tackled the concept of public space differently, and each platform chosen by the individual artists offered creative potential for unique interaction and diverse artistic interventions. Through audio sculpture, VR/AR, relational art, and performance art, these four young artists successfully re-imagined their relationship to the public and concurrently broadened our own conceptions of public space.