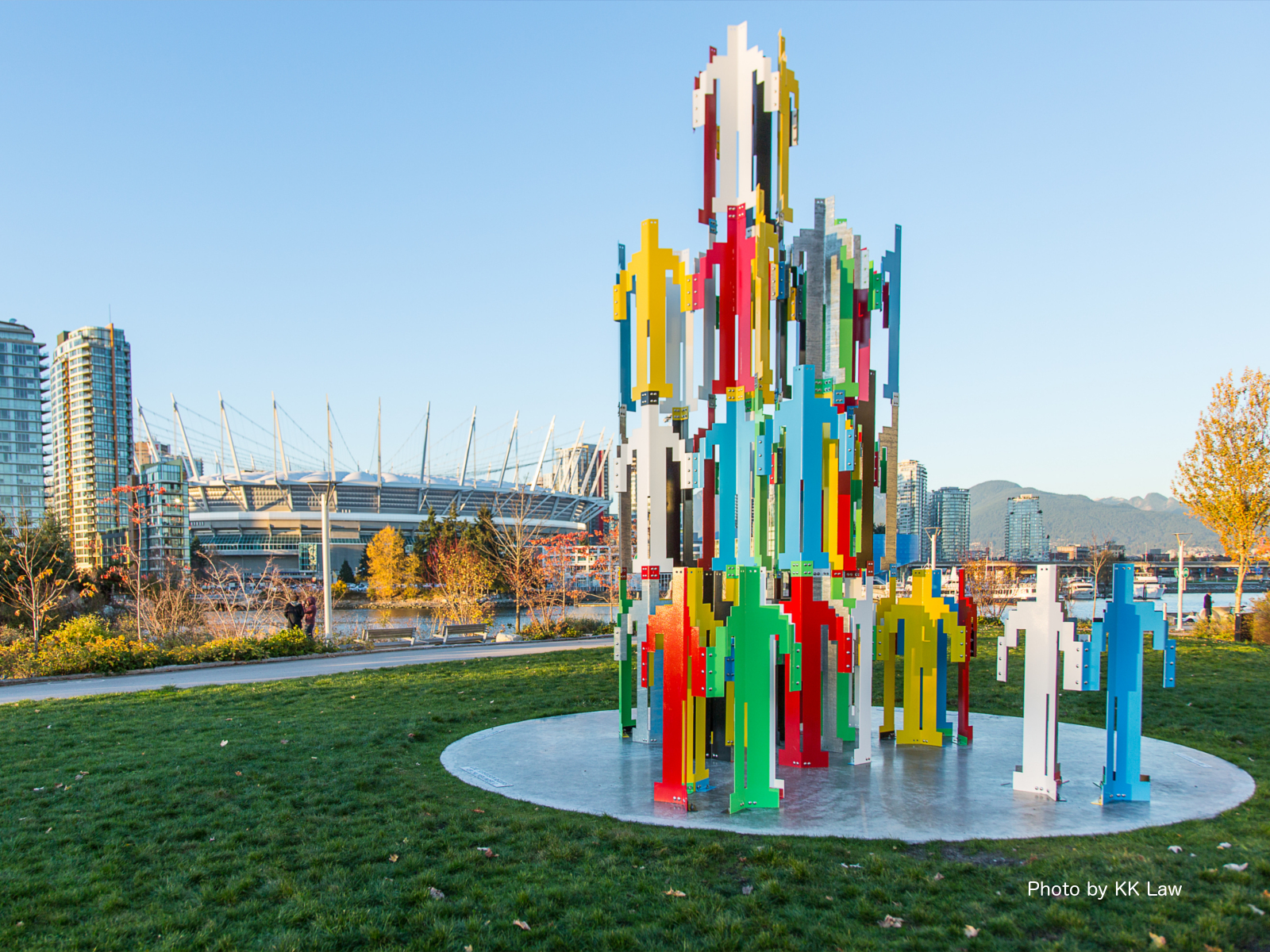 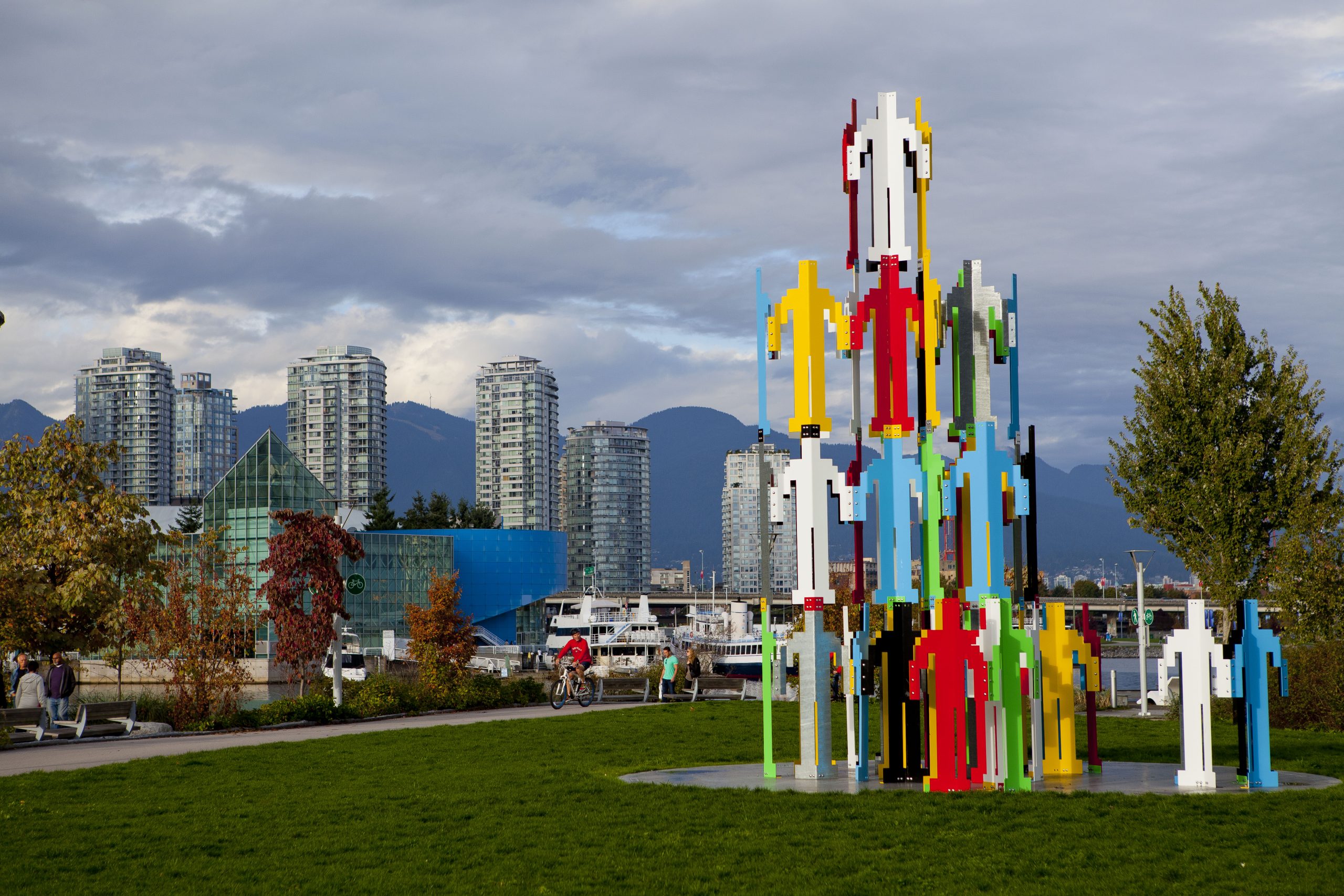 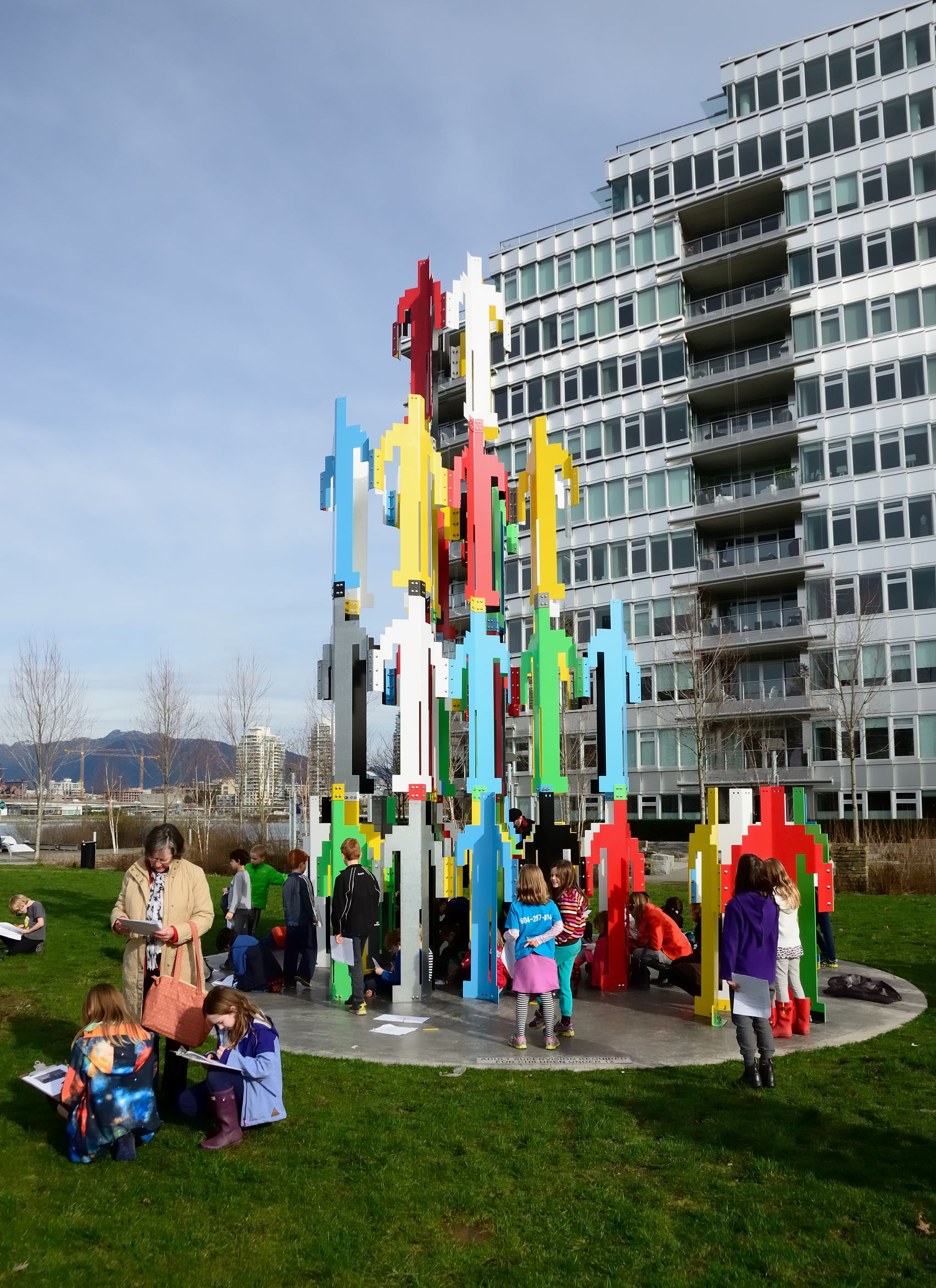 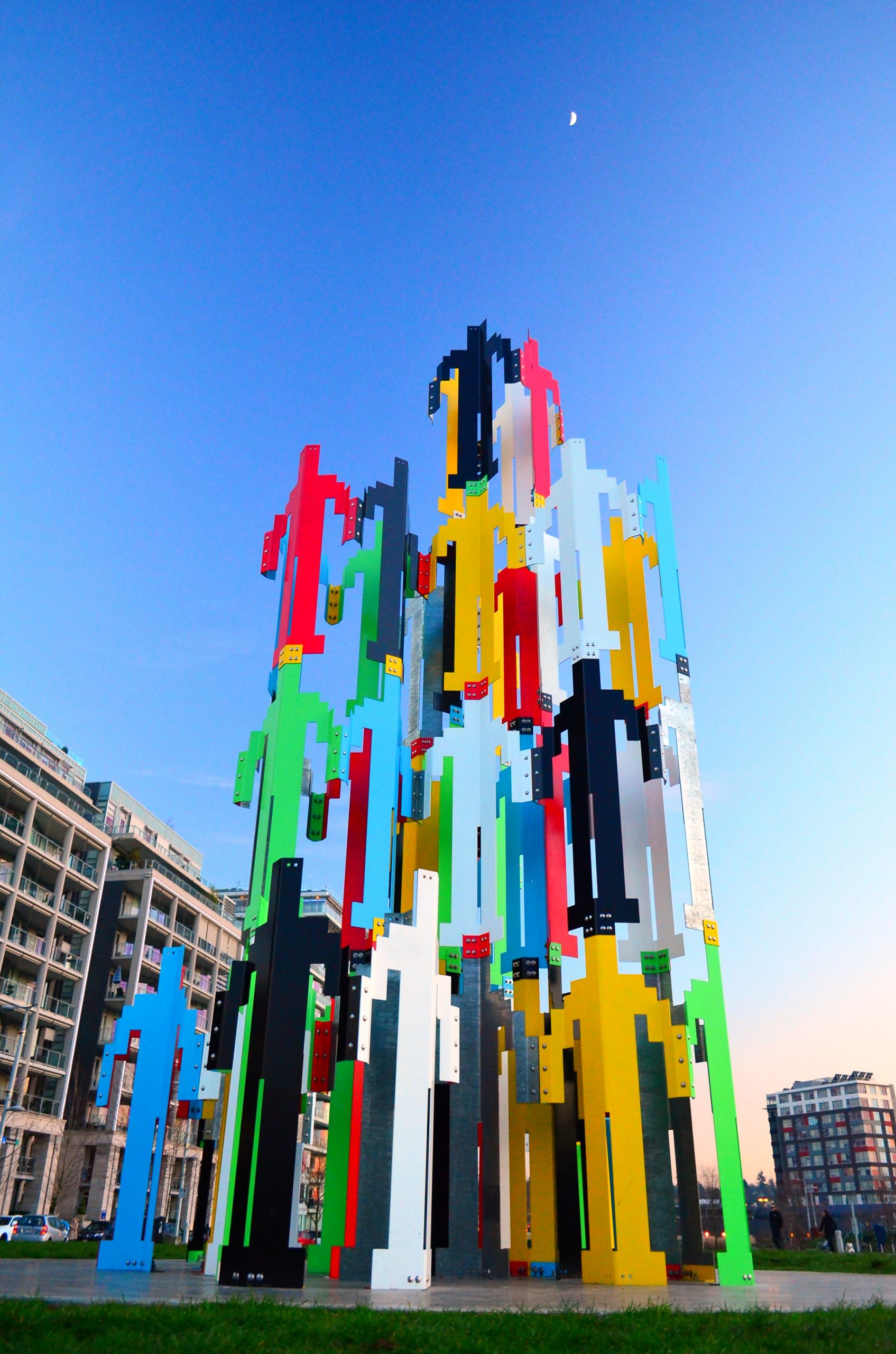 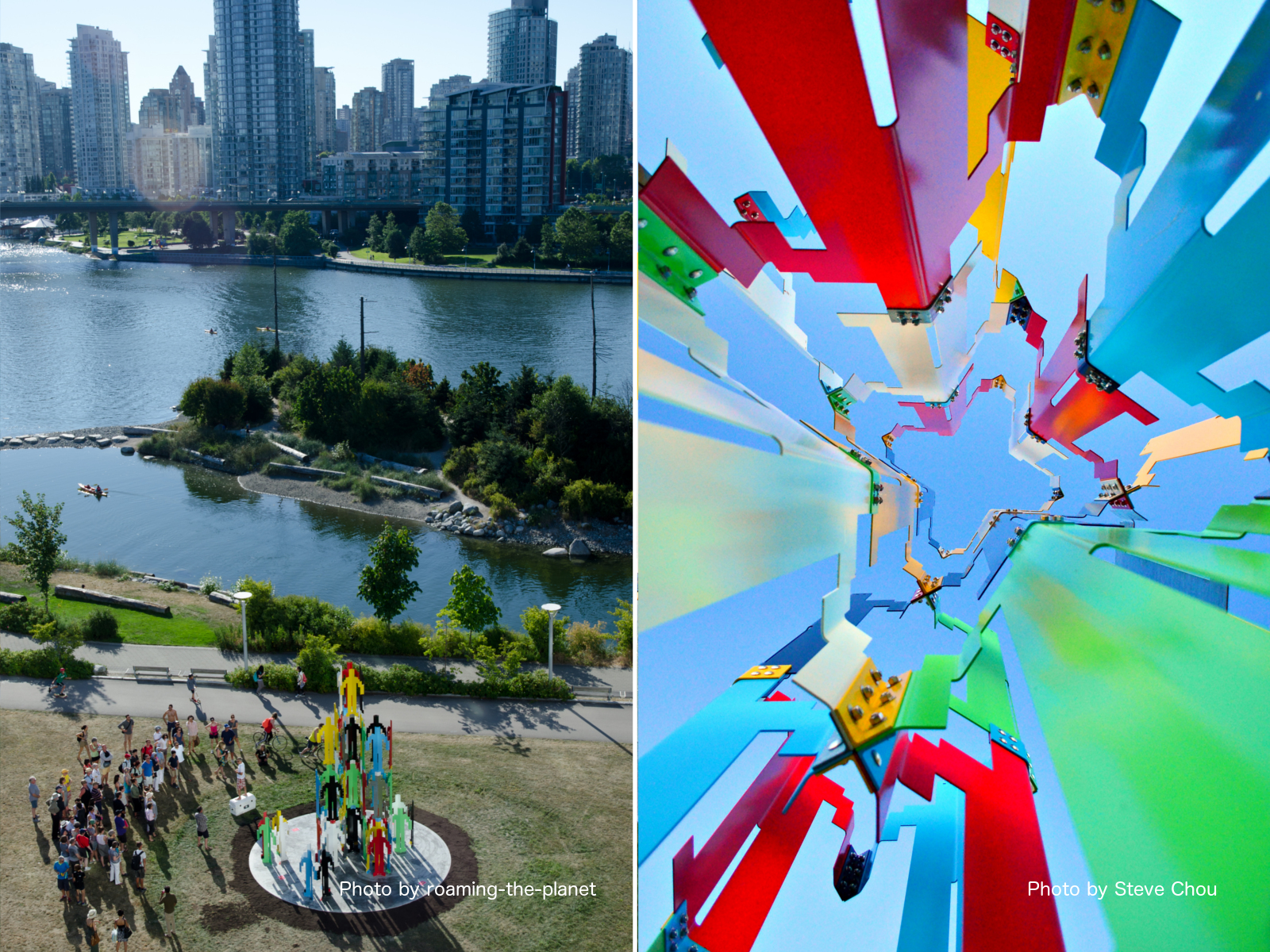 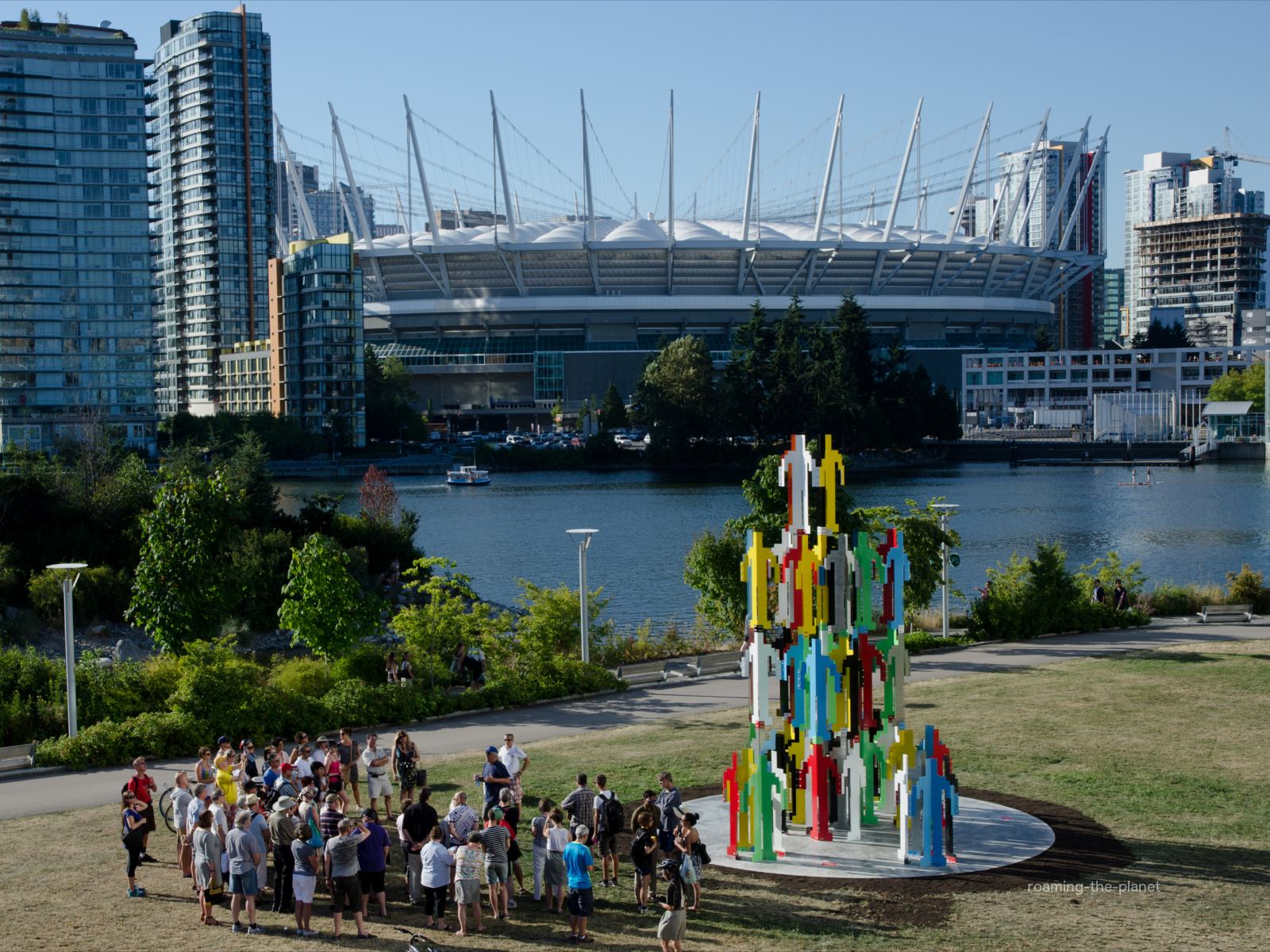 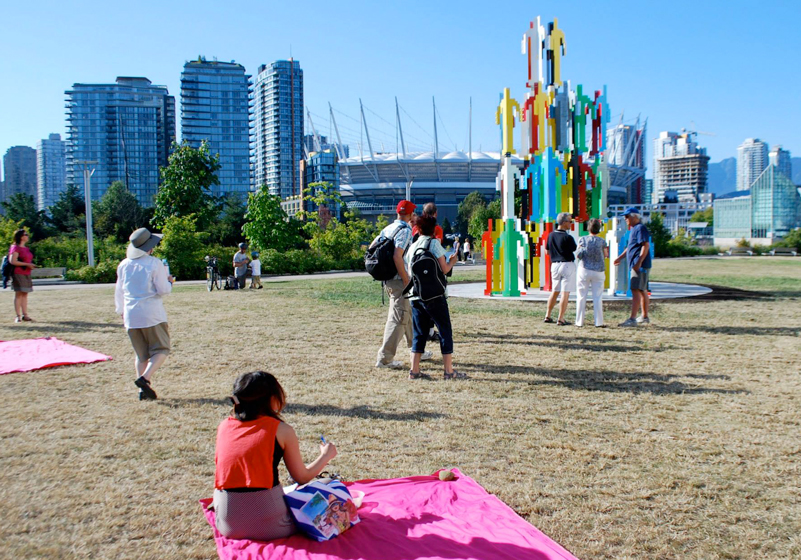 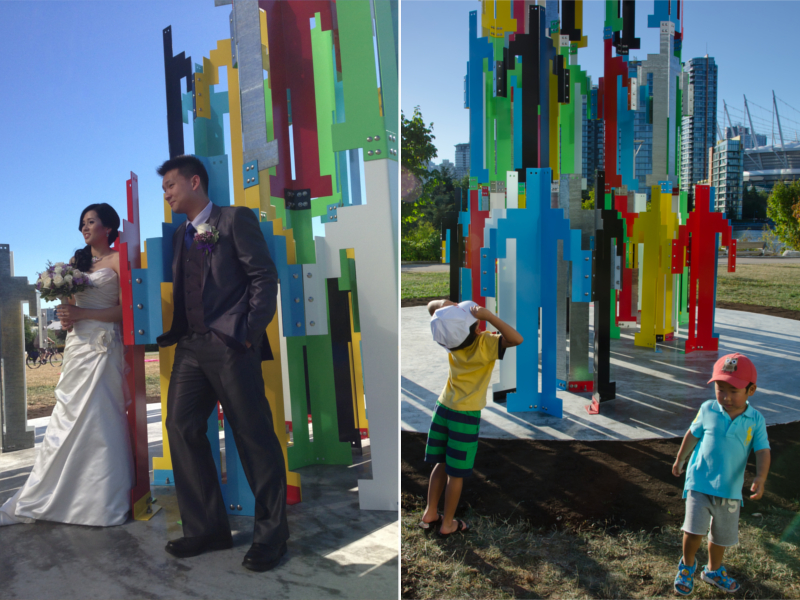 Drawn to Olympic Village, where Vancouverites worked together to forge one of Canada’s greenest communities from an industrial lot, Jonathan Borofsky personally selected the site for the latest sculpture in his celebrated Human Structure series.  In keeping with this location, and with the 2014 – 2016 Vancouver Biennale theme “Open Borders/Crossroads Vancouver”, Human Structures Vancouver focused on the notion of humanity working together to build our world.

This sculpture, comprised of a series of brightly-coloured interconnected figures, conveys a sense of universal connectivity.  The distinctive shape of the galvanized steel plates refers to pixels, the base unit of computer imagery, and comments on the structural connections in our digital world.

For Borofsky, the organic, modular structure of Human Structures Vancouver suggests an ongoing process of building and learning.  In the artist’s own words, “we are all constantly in a process of connecting together to build our world…Humans use structures to build our world, not only architectural, but psychological and philosophical structures.”

While previous works in the series have consisted of a single tower of figures, Human Structures Vancouver marked the artist’s first realization of multiple groupings.  As the central structure stretches up to the sky, two smaller configurations form preliminary foundations, alluding to a continuous cycle of growth.  Through this sculpture, Borofsky sought to nurture a sense of public positivity.

In 2017, Human Structures Vancouver was loaned to the Montreal Museum of Fine Arts for La Balade pour la Paix: An Open-Air Museum exhibit where the sculpture was seen along with many other celebrated public works of art on Sherbooke Street.  The exhibition took as its theme the possibility of openness, peace, and diversity among nations and was part of the official program of Montreal’s 375th anniversary and the commemoration of the 50th anniversary of Expo 67 and the 150th anniversary of Canadian Confederation. The sculpture, still on view at McGill University’s Downtown Campus, is located just inside the Roddick Gates on the right. 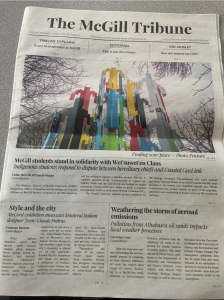