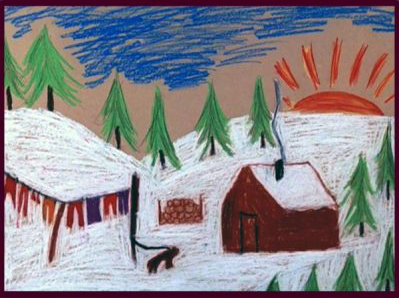 Released in 1971, this lyrical short documentary marked the directorial debut of legendary Abenaki director Alanis Obomsawin. Filmed at a residential school in northern Ontario, it is composed entirely of drawings by young Cree children and stories told by the children themselves. Listening has been at the core of Obomsawin’s practice since the very beginning. “Documentary film,” she said in a 2017 interview, “is the one place that our people can speak for themselves. I feel that the documentaries that I’ve been working on have been very valuable for the people, for our people to look at ourselves… and through that be able to make changes that really count for the future of our children to come.”

This unit has been created to help teachers and students to learn with Alanis Obomsawin’s documentary film Christmas at Moose Factory in the classroom. Students will learn about Alanis Obomsawin’s mission to tell stories through her documentary and learn about Moose Cree First Nation. Using the stills in the documentary that were created from drawings of students attending a residential school, this film offers opportunities to open the discussion and reflection on Indigenous peoples’ lives and experiences and connect with units relating to residential school history and impact in Canada.

This guide suggests a set of activities for grades 4-8 and adapted ideas for grades 9-12.