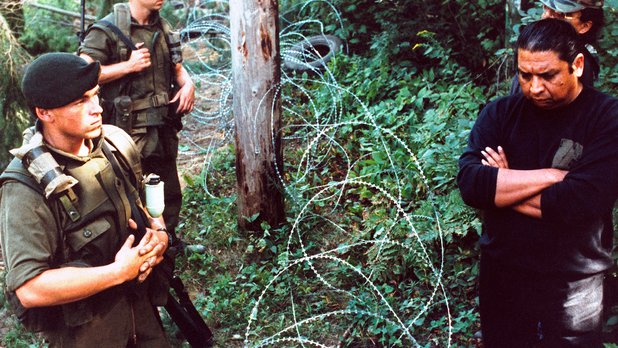 In July 1990, a dispute over a proposed golf course to be built on Kanien’kéhaka (Mohawk) lands in Oka, Quebec, set the stage for a historic confrontation that would grab international headlines and sear itself into the Canadian consciousness. Director Alanis Obomsawin—at times with a small crew, at times alone—spent 78 days behind Kanien’kéhaka lines filming the armed standoff between protestors, the Quebec police and the Canadian army.

Released in 1993, this landmark documentary has been seen around the world, winning over a dozen international awards and making history at the Toronto International Film Festival, where it became the first documentary ever to win the Best Canadian Feature award. Jesse Wente, Director of Canada’s Indigenous Screen Office, has called it a “watershed film in the history of First Peoples cinema.”

BIG IDEAS with Film Unit: The Oka Crisis and Indigenous Resistance in Canada

This guide has been designed to go along with the documentary films Kanehsatake: 270 Years of Resistance, directed by the world-renowned Wabanaki film director Alanis Obomsawin. Students will learn about the importance of the Oka crisis in recent Canadian history and the need for a consultation process today with First Nations whose lands have been historically colonized and occupied by the French, British and continue today to be shaped by American and Canadian governments. The main activities of the unit include viewing the film, discussing and analyzing the Indigenous Peoples’ and the Canadian governments’ actions over the 78 days of the civil unrest in Oka. Finally, students in groups of 4 will prepare a presentation and report their 3-top prescription to the current federal government’s policies in improving relationships with Indigenous nations.

The overarching goal in this unit of exploration is to encourage students to practice historical thinking skills to be able to ethically evaluate past events to develop an educated opinion about the current events and come up with possible solutions to shape the present and future in a positive way.  The Oka crisis is not an exception and similar events still happen today as was the case with barricades and resistance in recent years at the Standing Rock Protests in the United States, and pipeline protests here in Canada. History isn’t over, these similar events and conflicts continue across the continent.