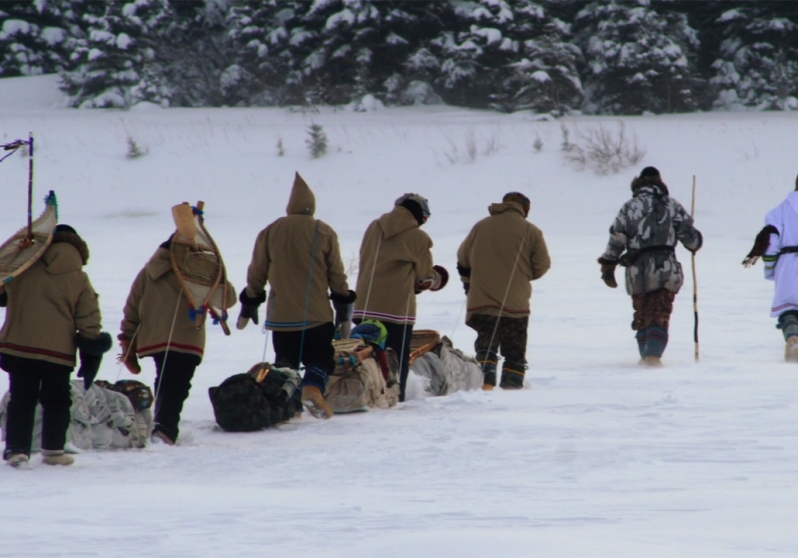 Walking is Medicine highlights the story of the Nishiyuu walkers, six young Cree men who, in 2013, decided to trek 1600km from Whapmagoostui, Quebec, to Ottawa, They made the walk in the spirit of their ancestors, whose traditions were to travel long distances in the winter because the rivers and lakes are frozen. This was an effort to meet with so many different nations from across the country and to be part of a new beginning.

They were inspired by the Idle No More movement, a grassroots movement launched in November 2012 in opposition to Canadian Bill C-45, the government’s omnibus budget bill that includes changes to land management on reservations. This group of young people hoped their walk would bring attention to indigenous youth and issues like depression. By the time the group arrived in Ottawa they had received national media attention.

Walking is Medicine, by Alanis Obomsawin, provided by the National Film Board of Canada

This guide is designed to shed light on the actions of Indigenous young people as they strive to bring national awareness about challenges faced by First Nations people such as marginalization, poverty, lack of clean drinking water, and inadequate housing. For them, this walk was also a way of finding healing within themselves and their communities of the wounds of the past and present. The journey followed the traditional trade routes of the Algonquin, Mohawk, and Cree, serving to promote solidarity within and among nations.

This guide will help teachers and students to listen to the views and perspectives of Indigenous Peoples and see how the actions of a group of young people became a catalyst and inspiration: for their community all those they encountered on their journey. This guide also helps students to think of possible actions they can take to raise awareness about an issue that affects their wellbeing. Moreover, this resource also makes connections to Physical and Health education, as it involves healing that comes with a physical journey, the act of walking for a greater purpose.