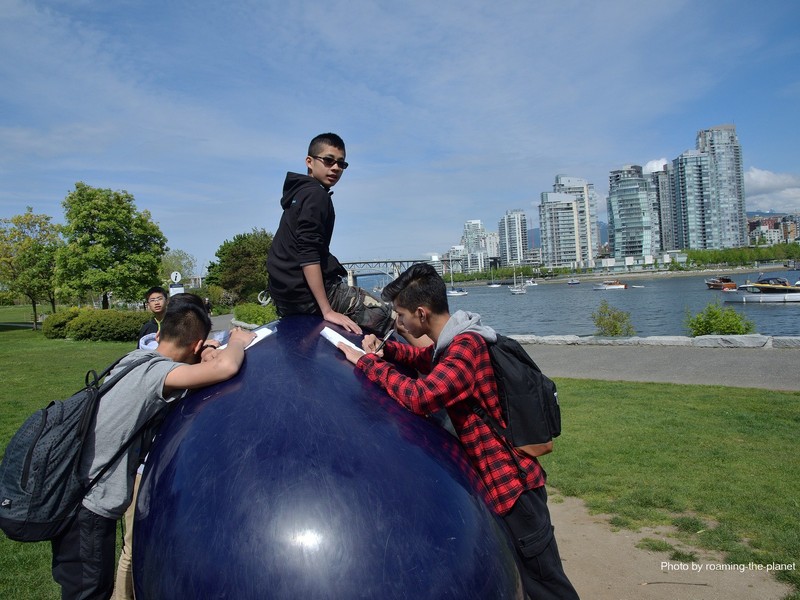 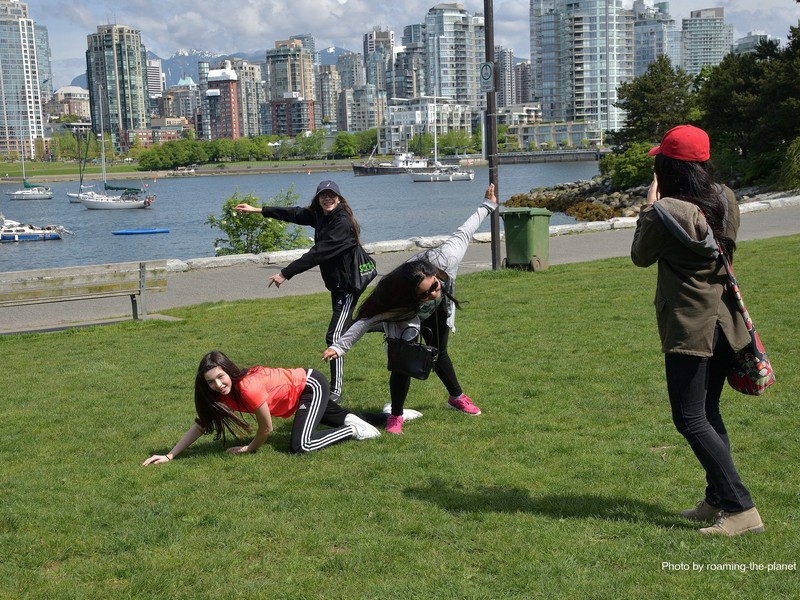 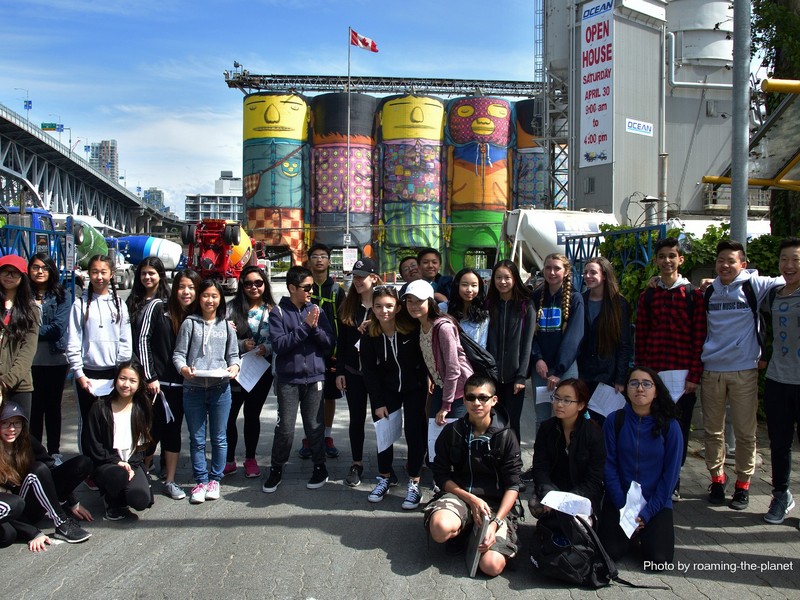 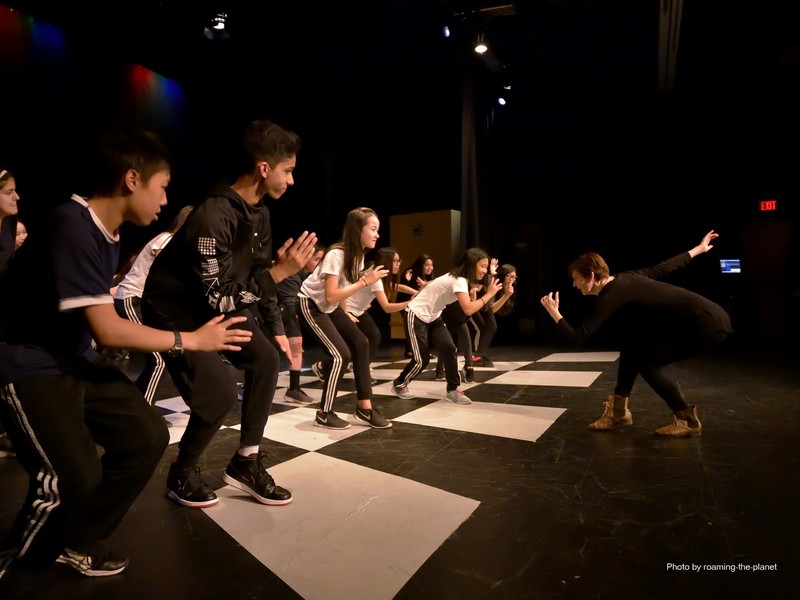 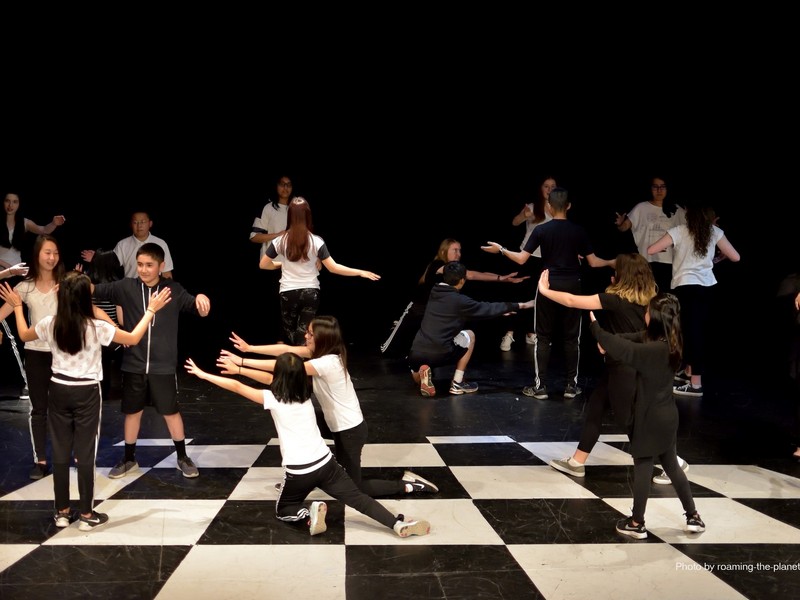 Through this inquiry project, students learned about how society shapes individuals, both in our time, and in other time periods, and how individuals in conflict with the status quo can enact positive change in their worlds. Through a novel study of The Outsiders, a historical study of the Renaissance, and inspired by Biennale art installations, students engaged in a study of identity that explored values (both personal and societal), conformity and individuality, and leadership and innovation.

Connection to the Vancouver Biennale

The class studied Magdelena Abakanowicz’s Walking Figures and it’s expression of sameness, and walking without guidance, reason, or mindfullness.

They also saw Giants by OSGEMEOS and Cosimo Cavallaro’s Love your Beans which celebrates the difference amongst sameness, and inspires “building the beauty that you search for in life.”

Individuality is challenged in a world that values conformity. Individuals can enact change in the world.

Change is often created in situations of tension, and conflict over what is traditional and what should be innovated.

Art can act as a catalyst for change.

Exploring text and story helps us understand ourselves and make connections to others and to the world (Grade 8 English).

How do individuals enact change in their world?

Students go to design a meal that represented themselves, either culturally, or metaphorically.

Students examined advertisements to decipher the values that are promoted within them, and especially how ads can communicate a specific identity (i.e. Vancouver, Canadian, North American)

Students investigated and discussed the sustainability of ecosystems in order to look more closely at the relationships between individuals and society.

Students got to visit Walking Figures, Giants and Love your Beans in person, and viewed Dough Portraits online. Students considered the works in terms of the questions: how are our identities impacted by society? How can we find our identity in society? Why does it matter to have an individual identity?

Students created identity maps, wherein characters from the novel The Outsiders were portrayed in the centre of the map, with character identities branching outwards. They then repeated the activity from their own perspectives and mapped their own identities.

Students completed the sentence: ____________ is important to me (Object, person or value). Students did so anonymously, and posted their finished sentences around the classroom for a gallery walk. Students commented on the posts, with the following questions in mind: How do individual values compare, and how do they collectively illuminate this generation and this era?

Students considered the following questions: what are the core values with which they most identify? Where did these values come from? What happens when others challenge your values, or even worse, attempt to destroy them and replace them? (i.e. considering the Indian Residential Schools).

Students collectively brainstormed what it meant to be a student at Burnett, a vancouverite, and to a larger extent, a Canadian, and they shared their ideas as a class. Students read the poem “We are More” by Shane Koyczan. In the same fashion, they wrote an “I am more” biographical poem. Students discussed the “We are More” poem in light of the fact that Shane Koyczan will no longer perform this poem, due to his disillusionment with current Canadian politics.

Students did ‘wordle activities’ to represent “how I see myself”,”How my peers see me”, “how many parents see me”, and “how society sees me.” Students considered if these representations were different or the same, and what that said about them.

Students asked the following questions: in what ways would they consider themselves to be an “outsider” in society (thinking of the different areas of their lives)? In what ways is being an outsider a detriment, and in what ways is it an advantage? How can they develop their own “outsiderness” or individuality, and why would they want to?

Students had the opportunity to inquire into wether being an “outsider”, or in other words, being different, is valued in our Canadian society, compared to conformity. They used historical examples (i.e. in terms of colonization and immigration. Students explored the notions of multiculturalism/cultural mosaic, and melting pot. Students questioned how assimilation has impacted immigran populations and the First Nations people of Canada, for instance.

Students then looked at the 2010’s as an era. Students asked the same questions in reference to the current era.

Students did an in-depth study of the Renaissance. They asked the questions: When was it? Where did it come to be, and how far reaching was its implications? By what was this time period characterized? What conditions gave rise to the Renaissance? Who were some significant figures of the Renaissance, and what were their contributions? What is the legacy of the renaissance today?

Students then compared and contrasted the eras, asking the question: What can you see as the most significant commonalities and differences between the three eras? Since change is a significant part of each of these eras, students could investigate the causes of change in these eras, and especially the people who enacted change. Students considered the commonalities and differences between these change makers.

Sutdents profiled someone from the sixties who made a difference, answering who they were, what they did, and what difference they made to later generations.

Students also profiled someone from the Renaissance who made a difference, answering who they were, what they did and what difference they made to later generations. Students profiled someone from the current generation who is making a difference, asking them who they are, what they are doing, and what their legacy already has been, and what it will be to future generations. Students were asked to compare and contrast these figures, and ask the question whether they could be described as “outsiders”, and if so, in what ways.

Students asked the question, if you could imagine what difference you personally will make to future generations, what is something that comes to mind as a possibility? Student found a medium to express the difference that they hoped to make

Students became leaders in the classroom, teaching their classmates a mini-lesson on a skill, or a topic of their choice. Students reflected on how it felt to lead, even in a small way, in the classroom.

Students inquired into the question: What are my stories, and why do I need to tell them? How might their messages impact others, both now and in the future?

“If we want to live at peace with ourselves, we need to tell our stories.” -Richard Wagamese, Indian Horse.

The class communicated their personal identities and their relationship to the class collective identity through writing and interpretative dance. Students decided on a collaborative way to show that they could make a positive action on the greater community, and then enacted their plan for a positive change.

After taking a field trip to Walking Figures , Love Your Beans and Giants.  Students were encouraged to write and reflect on each of the sculptures including:

Observe the surroundings what do you see? Take detailed notes of observations for classroom visit.  What are your impressions of the art piece?, How does the location play into the messages?, What do you think is intended meaning and what is your personal meaning? Which piece do you think most closely relates to the Outsiders and Why?

In classroom  the students discussed the importance of detail in art. i.e. paintings, story telling, dance. Reflect on observations and findings. Combine findings to co-create between choreographer, students and teachers a dance based on said findings and observations. Dance will be performed at the JN Burnett Secondary.

Students were introduced to dance movements such as exploring levels in movement i.e. high, med and low, stillness coming out of movement ex. four walks and four beat rest, holding shape within the body on rests, and variation in speed and how this adds dynamics to the phrase of movement. Teachers also contributed to pattern of movement exercise using variation in levels and speed. The class discussed the field trip and attach the idea of detailed observation happening at  each of the sculptures.

Reflect and discuss findings from field trip. Explore movement ideas and make connections using key words to incite movement: The class reviewed dance syllabus. Listen to 1960 What? -Song by Gregory Porter and Discuss what they heard and started group choreography. Document findings on white board emphasizing 6 observational words reflecting on the sculptures.  Working in 6 smaller groups assigning each group one word. Introducing the importance of  pattern change to create shading in choreography students moved into 3 different pattern sequences of their choice.  Pulling from their dance vocabulary and using their one assigned word they used inspired movement to change from formation one to formation two, i.e circle, into two straight lines. Encourage figurative and abstract thinking so students can allow a more expansive facilitation of expression.

Artwork can bring people together to admire beauty and creativity… in one dance we come together as a community to work together.

Nothing gold can stay. Express how nothing good lasts forever. With the Biennale art the theme of being temporary is shown the fact that they only display the the art for a limited amount of time. For the dance each move will only be there for a few counts.

Diversity change personality and expression an example of change could be changing groups in dance to ponyboy change in personality.

The outsiders shows the imbalance between the different social classes which caused controversy. Biennale art caused controversy because the public has to interpret which could be different from the artists intention. Our actions in dance, doing poses, working as individuals or in group. The audience presents their own opinion.

This project was wonderful. The students and teachers were very receptive. I found the students very mature in their findings. Both Ms. Merali and Ms. McColl were very prepared with their projections. With help from Ms. Merali the students were able to connect the three elements. Biennale/Dance/ The Outsiders very well.

As an observer I witnessed an enthusiasm for expression and a strong work ethic bringing together a level of communal support that is wonderful to see at this level.