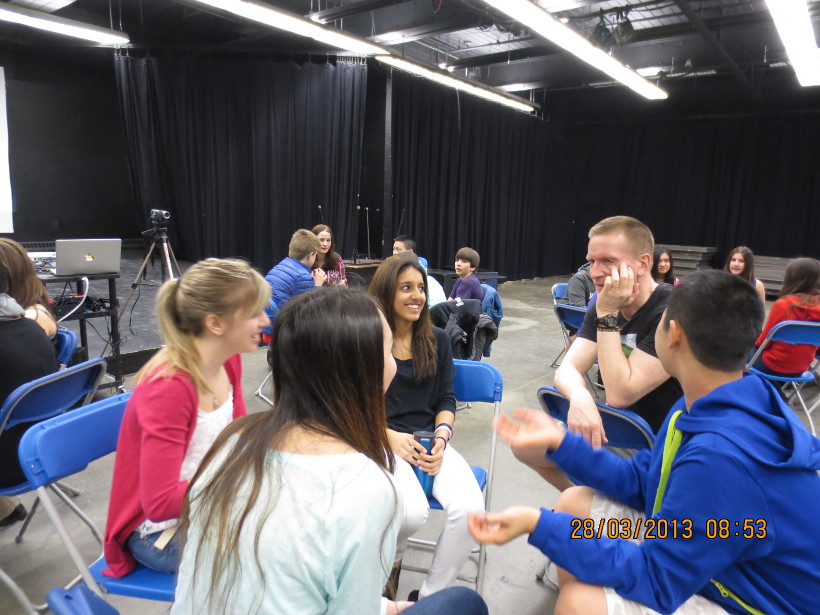 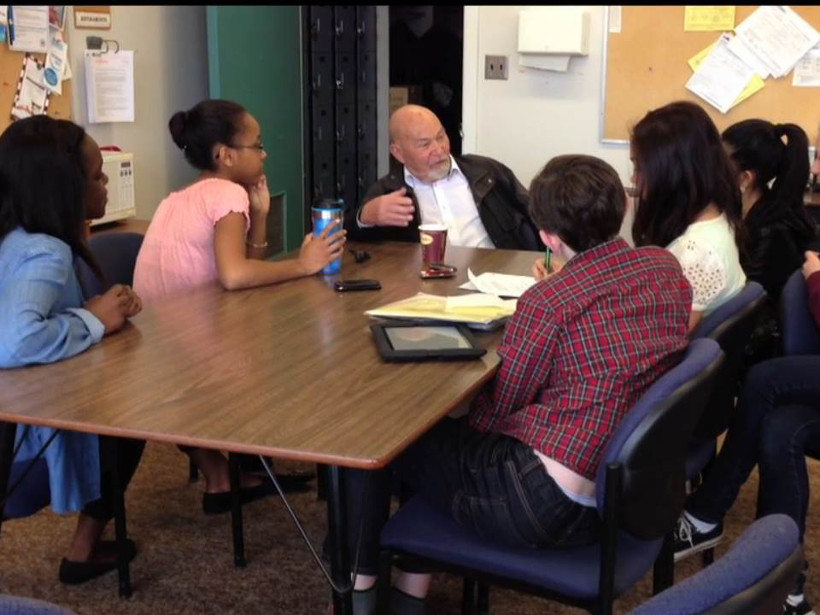 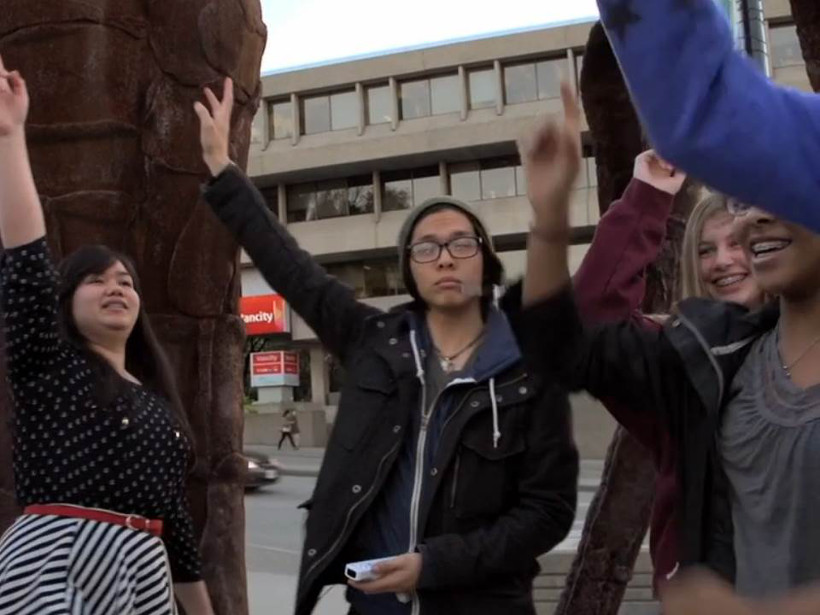 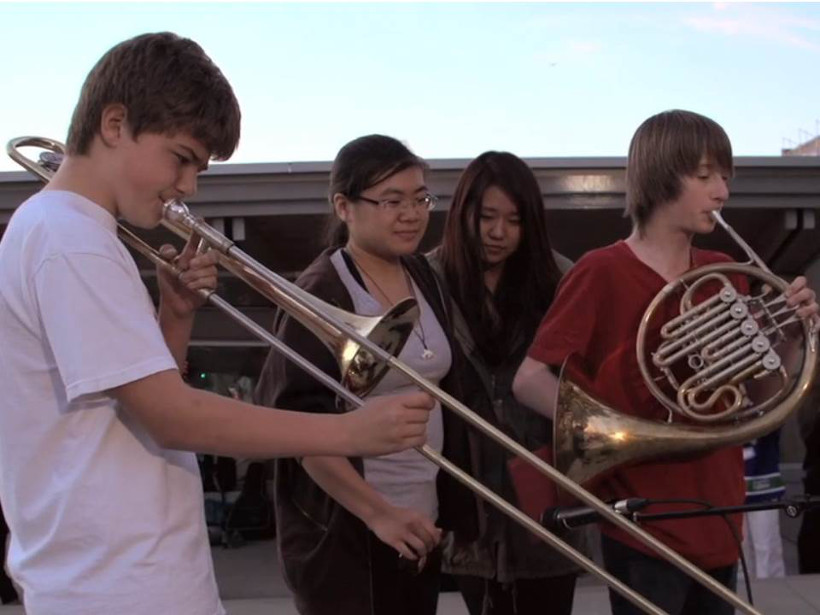 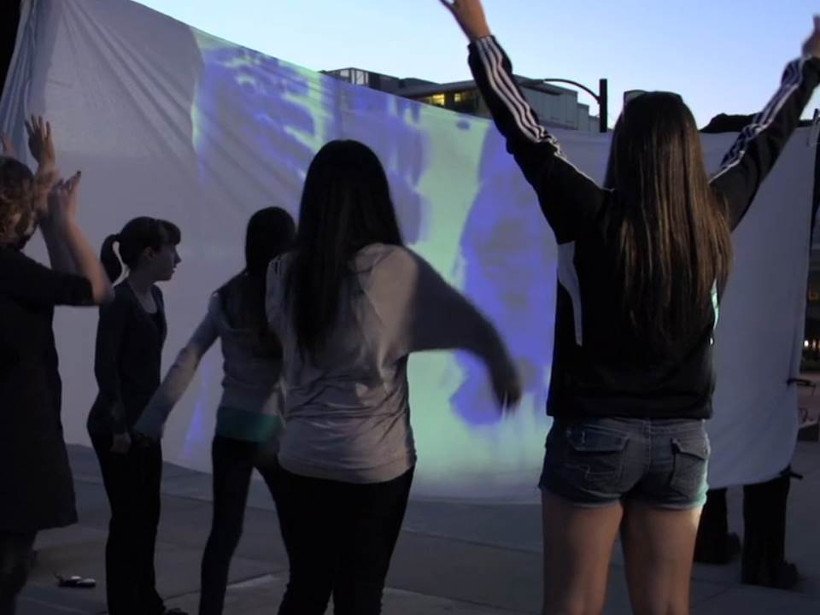 Students from Confederation Park and Alpha Secondary came together for shared exploration of transitions and identity, sourcing from the Biennale legacy sculpture Walking Figures. With the goal of creating a legacy program, the themes were especially potent for the Grade 7 students in their transition from elementary school to secondary school and their subsequent work with the Grade 10 students. Students learned interview techniques and hosted interviews with senior citizens in the community. On May 3rd the students gathered at the Walking Figures to make a multimedia performance art installation around their experience with the project. They explored movement through a process of mimesis, shared selected text from their journals, produced electroacoustic sound, and created visuals from their recorded interviews with the seniors.

In a time of heightened awareness of the need for self-definition (identity), how can we better develop sensitivity for finding ourselves through others?

During the learning process, the artists introduced students to contact theory, viewpoints, and film history in order to stimulate the notions of identity coming from observance of others, the value of listening, and transitions as long-term, process-oriented exploration. The students also studied the interview and documentary processes to host interviews with senior citizens in the community, again focussing on transitions and identity. Along with the thematic material, the artists exposed students to different artistic mediums and tools that allowed them to capture reality and transform it to their own artistic expression through film, new media, sound art, text, or movement.

The students were introduced to several different mediums to communicate their insights. They created video documentation of their interviews with the seniors to explore their process of social roles, accumulated two months worth of journal reflections based on observance of others, organized physical gesture scores from their classmates after developing a critical eye for body-written-history, and learned how to manipulate electroacoustic sound using digital interfaces. All of this culminated in a final multimedia performance art installation where they were given a structure of three areas (creation, observance, and reflection) in which to share their interests and their journey.

The project itself, was constructed as a way to tie the two schools together in a legacy project; one that could potentially be repeated for future students, become a bigger part of the community, and serve as a launchpad into greater collaboration.

The students engaged with the community in their meeting with local seniors to share their thoughts around transitions, both sharing their insights and learning from the experience of older generations. The elementary students be attending Alpha Secondary next year, which directly promotes their continued learning and contact with the senior students through a mentorship design.

History on the Body

Students were introduced to six different social roles commonly found in working group relationships. Through contrast and confluence with the film roles from previous class, the students got into their groups and did a mock interview with the iPads in hand. At the end of the session, the artists went through some of the videos and gave input as to what worked and what would prove to be a challenge for the actual interviews next class.

Day of the Seniors Interviews

Students used their accumulated knowledge of group dynamic, contact theory, film process, and roles to interview a senior while filming the footage on an iPad. Four groups in the first half of the session and five groups in the second half; while waiting to film, the students waited in a green room (the staff room) filled with refreshments and chatted more with their respective senior. The Grade 10 students were in charge of ushering and hosting the seniors (organized by Mr. Meredith). After the debrief and thanks at the end of class, iPads were collected by the artists for quick uploading.

Introduction to New Media and Performance

Students went through an en-mass, rapid sharing session of thoughts and ideas from the seniors interviews. The objective was to get as many ideas out as possible, share, and take notes to reflect on later. The latter half of the session was dedicated to introducing the artistic tools that will be used towards the final performance installation.

May Preparation for the Final Performance

Students rehearsed for the on-site performance in class.

Students came together to perform at the Walking Figures site in the evening.

I am extremely humbled and thankful for the opportunity to work with the students from Confederation Park Elementary and Alpha Secondary for Vancouver Biennale’s BIG IDEAs Project. The process itself was filled with so many brilliant moments of creativity, generosity, and sharing from the students – before we knew it, what seemed like simple classroom visits took on a life of its own.

We gave this project permission to have a solid and patient structure at the beginning and a very open performance at the end so we could better incorporate and work from the student’s interests and creations. Though seemingly slow-paced at times (especially the listening exercises), the classes went very well, and the notion of long-term learning processes seemed as clear as it could be presented. Sammy and I worked hard to thematically and conceptually intertwine our two mediums and art practices together; the end result was an extremely organic creation, born from what the students found within their time together. The only portion of the project I would change/do differently, is that we do double the amount of sessions in half the amount of time. This type of work was not best explored once a week.

I’m very excited to see where the students take those experiences and connections next; they are a passionate and energetic group with so much potential and incredible generosity.

Observation of a UBC teacher candidate:

Having spoken to the students and overhearing conversations, they have learned about the use of performance as a means of expression and presenting themselves in a different means. They had fun putting the performance together and during the lulls of preparing, the grade seven and grade ten students bonded together by conversing and playing games with one another. From observation, good relationships and bondings have been made through this process.

The teachers seemed to have built a stronger bond with their students throughout this process as they rarely stepped in with the creative capability each individual student brought into this performance. They were facilitators of a creative drive and aided students just enough to give them a imaginative push. They saw what their students were capable of doing on their own and stood from a distance watching the process grow into their own. 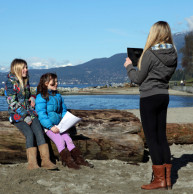 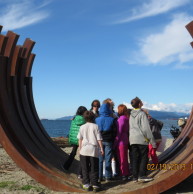 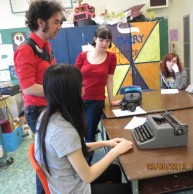