Eagle Mountain: How Does Art Communicate the Human Experience? 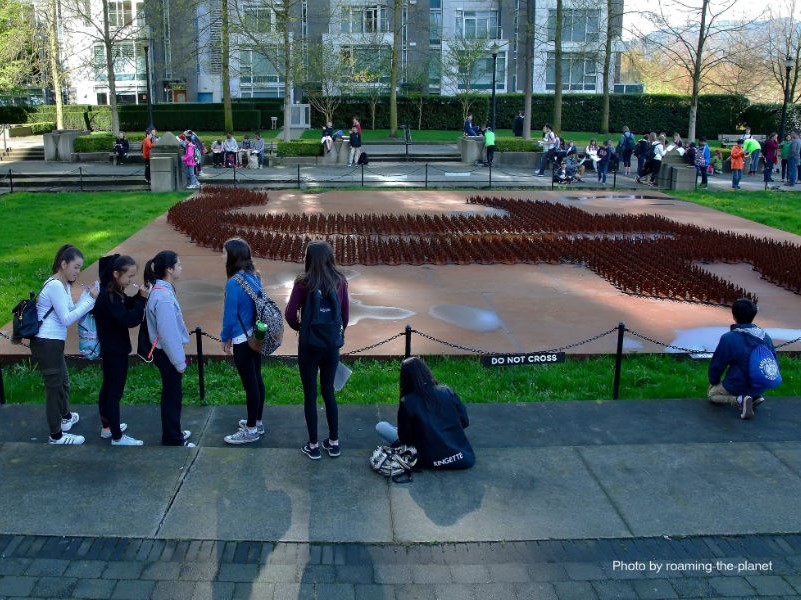 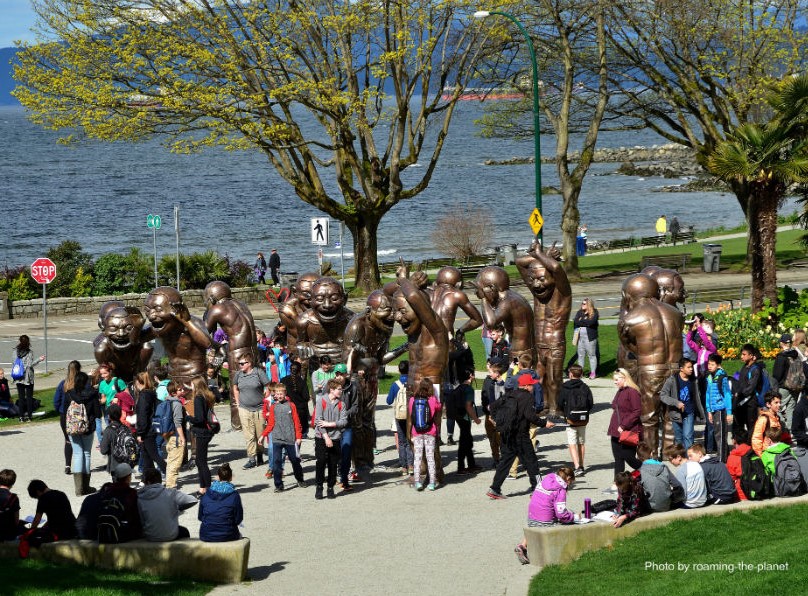 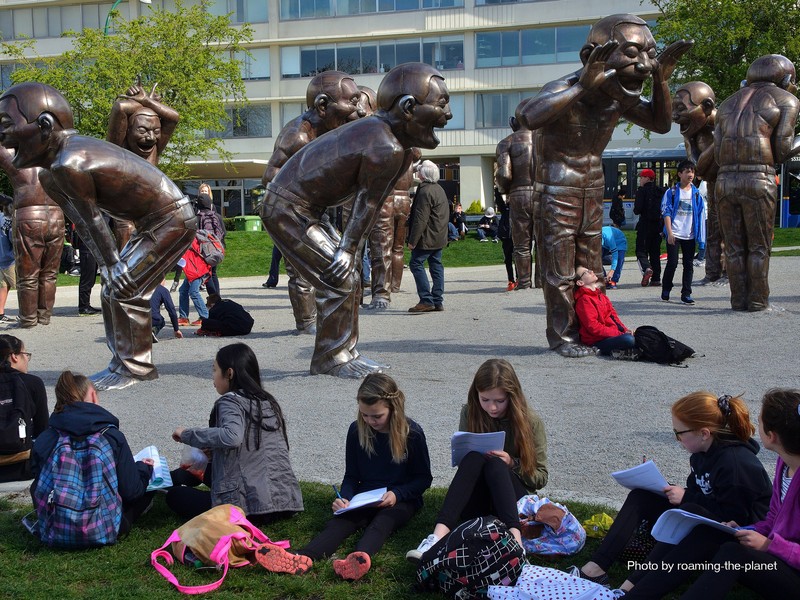 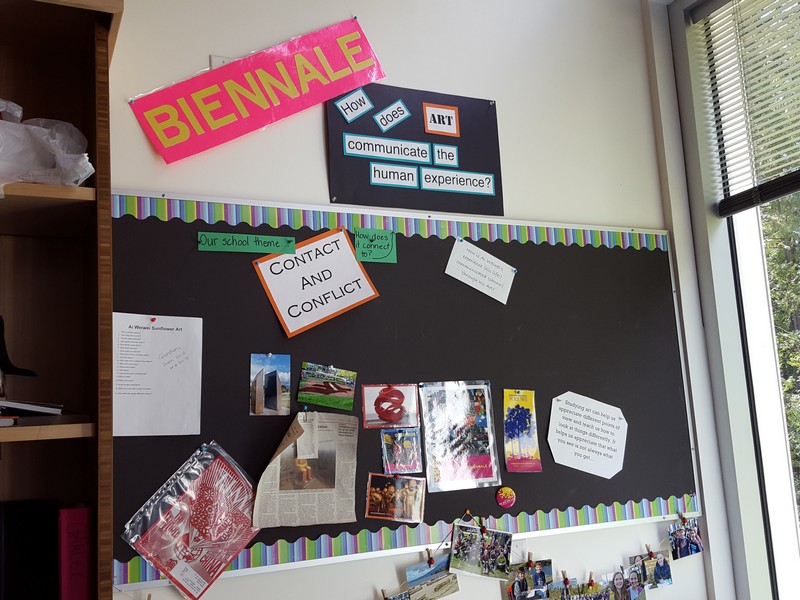 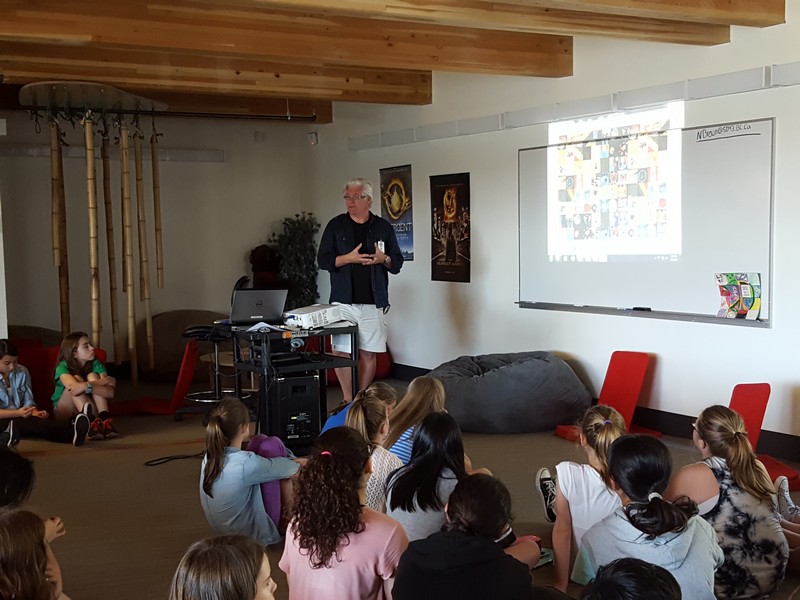 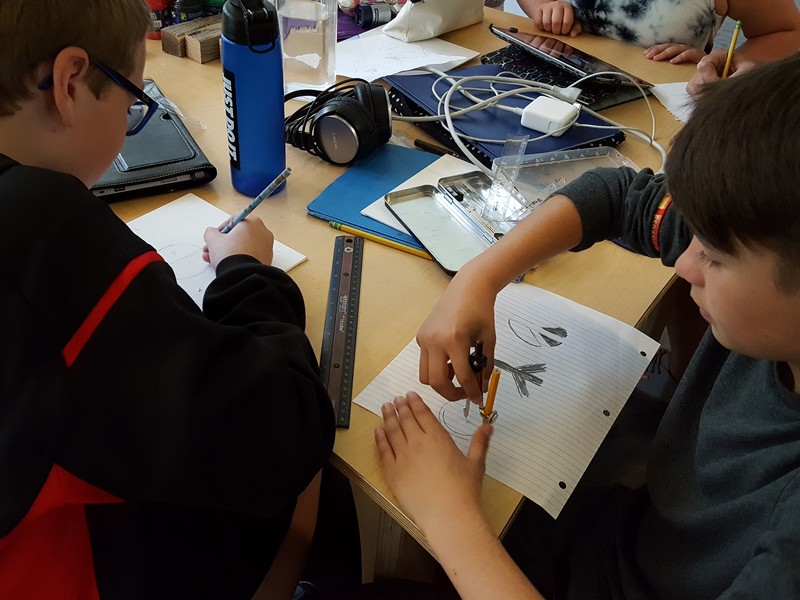 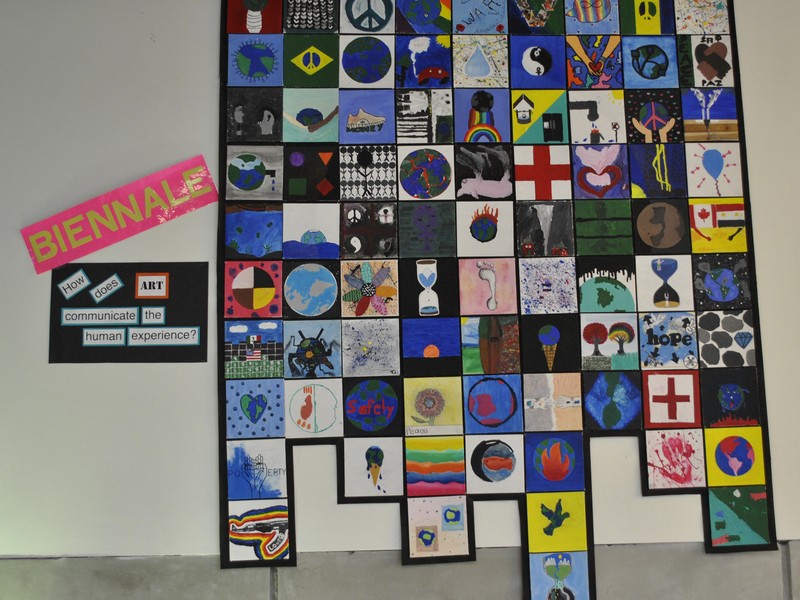 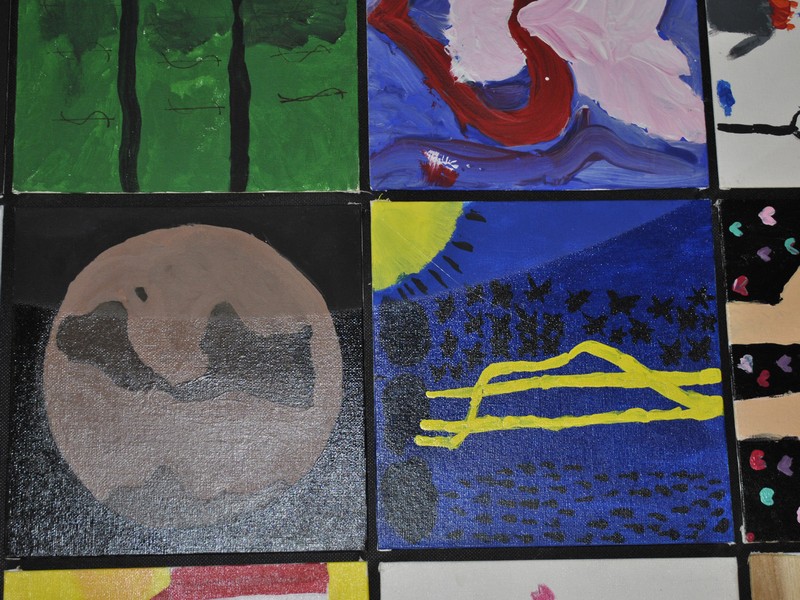 Students explored art and global issues with the final project being a piece of art that they created representing an issue they were interested in.

The class visited the installation by Ai Wei Wei titled F Grass. Ai Wei Wei, as an artist, represents a struggle for artistic freedom and expression and he’s tried to convey this message through this particular installation. The students got to explore this piece as a jumping off point to explore other global issues currently affecting the world with particular emphasis on the plight of refugees and how they are being interpreted through art.

In this case, art acts as a direct catalyst for learning about global issues. The class examined various art works (poems, art, music etc) and looked at how those works reflected global issues.

Students will understand that art can be used to convey human struggles and how it allows for different interpretations and meanings to be represented within it.

How does art communicate the human experience?

Students were able to learn about the different agencies (UN, NGO’s etc) and the roles they play in global issues as well as international responses and cooperation in these matters.

The class worked towards hosting a Model United Nations conference exploring five different global issues: climate change, globalization, eradication of extreme poverty, gender and science, and zombie apocalypse (focus on the World Health Organization: Is your country prepared for a global epidemic?). This debate took place at the end of May.

Students came up with their own inquiry question to explore that included an aspect of  hands-on learning in the form of a science experiment.

Students in grades 6 through 8 worked in literature circles. Each of their books had a global issue that their class was addressing.

The theme at Eagle Mountain school this year was ‘Contact and Conflict.’ It can be interpreted in many ways and in this case, the students were studying various ways in which contact and conflict has impacted people and the environment. The class was exploring various government types (democratic, dictatorship, military dictatorship etc) and how they impact people (ex. civil wars resulting in refugees). Exploration of human rights and freedoms as well as repression, war, child labour was also included in this study.

The teachers were able to use these issues to see how they are represented through the arts (tying the study back to Ai Wei Wei and the restrictions he’s been put under by his government). As well, students looked at how street art is a form of community art and can express an immediate and often poignant meaning.

The students had many lessons on different forms of art and themes involved with their project leading up to their feild trip. They had lessons that focused on Ai Wei Wei’s artworks, as well as Banksy’s art work. The teachers focused their social studies lessons to explore themes of cultural revolution, feedom of speech and types of government. The students got to learn about street art and graffiti and how these mediums can be influenced and affected by government control.

In April, the students finally made a trip to visit Ai Wei Wei’s F-Grass, OSGEMEOS’ Giants, and Luis Fernando Pelaez’ Home by the Sea. They had been studying the meaning behind these pieces in the classroom and built up anticipation towards seeing them up close.

The teachers aimed to have the students develop their own message about a global issue they were passionate about and express their message on an 8×8 canvass with whatever materials they want. The school took all 90 canvass pieces and arranged them together in a circle formation, laying a clear image on top of the whole piece, bringing all of the student passions and artwork together to form one collective artwork.

The Big Ideas project, How does art communicate the human experience, gave me the opportunity to explore the ways in which art can be used as a method for responding to local and global issues which directly or indirectly effect human beings on a daily basis. Initially inspired by the Guiding Question, “How does art communicate the human experience?” and the Enduring Understanding, “art can be used to convey human struggles while also allowing for different interpretations and meaning to be represented within it”, my involvement with students began with a look at several examples of the Biennale’s public sculptures, specifically F Grass by Ai Weiwei. My initial task was to develop a link between Weiwei’s own biographical details and his sculpture.

My first meeting with students was held in the school library, a place where we would continue to meet for our critical thinking and sharing workshops. All 90 students from three separate classes ranging in grades 6 through 8, sat in small groups and participated regularly in discussions. Students were introduced to the notion that art can be about ideas (conceptual art) and they quickly learned that Weiwei was a keen advocate for and proponent of this type of art.

For one of our workshops, I had students organized into groups. Each group was given a postcard image of a famous artwork, several of which were Biennale sculptures. Students were then asked to apply a simple “WHO, WHAT, WHERE, HOW, WHY, WHEN” approach to helping them find meaning within the work. This approach encouraged students to develop their own meaning of the work individually and then share their ideas with other students in their group. Throughout this exercise I was mindful that students needed to develop a critical vocabulary with which to talk about art to enhance their experience during our field trip to Vancouver to see the work of Weiwei, Luis Fernando Peláez and Yue Minjun. Once all of the ideas were shared, students realized that they each had different experiences, which informed their understanding

of a work of art. In fact, each one of them made different observations. It is the sharing of these differences, however, that not only makes up the meaning of the work, but also actually helps to complete the work of art.

Our field trip was a huge success and generated a great deal of discussion about many of the issues we had discussed initially at Eagle Mountain Middle School. Once had debriefed about the works we had seen, the next step was to begin work on our project. Keeping in mind our Enduring Understanding “art can be used to convey human struggles”, students began a brainstorming session to identify a social issue that they wanted to address in an artwork of their own. Our project consisted of 90 individual canvases (each 8 inches x 8 inches) grouped together and mounted on a portable surface that could be exhibited within the school. Some of the issues chosen

After students had drawn their ideas onto a square piece of paper, I had a chance to talk with each of them to ensure they had a good grasp of the correlation between their concept and the final image they would paint on canvas. The next step was to begin the painting process, and we were kindly assisted by Mr. Keeler, the art teacher. Students produced a wonderful variety of images that incorporated not only painting but also multi-media collage as well as pen and ink. Our overall composition took the shape of a square with a broken, almost pixilated appearance to its bottom line. The finishing touch to the piece would be our motif of a lightly defined circle placed in the centre of the square, made visible by the outline of clear gloss spray. The motif was faint, almost invisible in fact, but when viewed from an angle, it was unmistakable.

In the final analysis, the students at Eagle Mountain Middle School have been able to provide a possible answer to the early question “how can art bring attention to human struggles while also allowing for different interpretations and meaning to be represented within it?”. By combining their shared ideas as images, they’ve given a voice to a diversity of issues, now unified under the symbolic motif of the circle – empowering strength in unity.