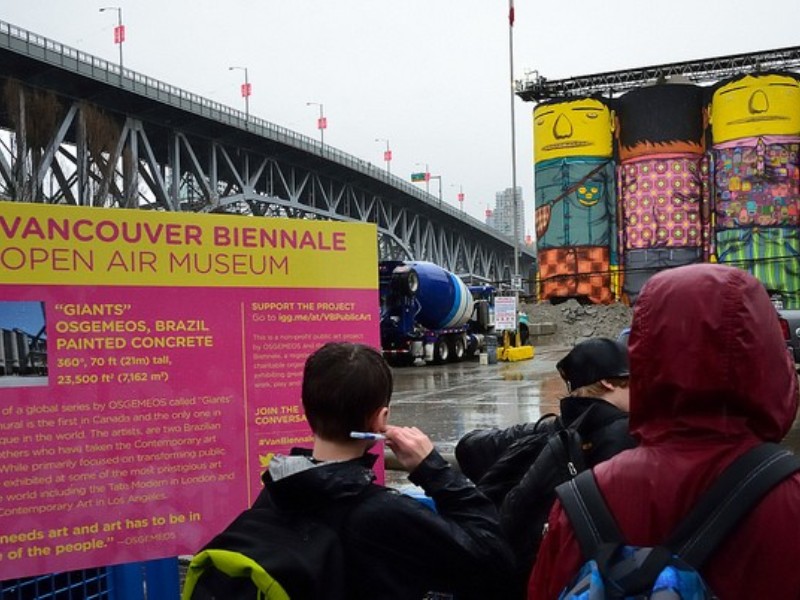 Students explored various time periods in history using the BIG IDEA of: the environment shapes how people develop. Different aspects of culture were explored and students created their own inquiries based on interests with strong emphasis on using art and alternate formats as a way to express knowledge.

The learning process was facilitated by art inquiry through music and theatre. The students explored how sounds and music are related to the environment and how they in turn shape people.

The lesson concepts and inquiry activities that were taken up during the project were:

Keeping in mind the BIG IDEA of “the environment influences and affects how people develop”, students began by exploring environments and ancient cultures.

Throughout this unit of study students used the five points of inquiry as a model for learning.

Field trip: The project began with the students and the teachers exploring the Biennale sculptures – Human Structures Vancouver, Love Your Beans, Giants. The students explored ideas around the relationship between environment and culture throughout the field trip. They used the Art Inquiry Worksheet to guide their exploration and inquiry process. Some of the key ideas that they explored were: the relationship of the sculptures to their environment, materials used by the artist, and how the artist’s ideas and beliefs shaped the artwork. The students studied the environment and their surroundings as closely as the artwork and it resulted in many interesting observations that were presented in the mind mapping exercise which was used to reflect on the experience of the field trip.

Mind Mapping (Reflection from the field trip): A significant aspect of the field trip was the reflection and sharing of ideas and observations after the field trip. The teachers encouraged the students to share their experiences through mind maps. Before working on the mind maps, together with the class, the teachers decided on a framework. The framework for the mind maps were closely linked to the guiding questions and the BIG IDEAS of the project.

Soundscape: During the first workshop with the artists, the students went through voice and body warm-up exercises, after which they explored the concept of soundscape. Similar to how landscapes give us an visual idea about the environment, soundscapes give us a aural idea. The students were given basic level of training in creating soundscapes: using the body to create sounds, layering the sounds, volume, pitch, etc. They were divided into groups and, working with the artists, they tried to come up with their own soundscapes. During this exercise, the students worked with awareness and attention, trying to recreate sounds to layer into their soundscape.

Frozen Tableau: In the next session, the students worked on creating a sculpture with their bodies using the form of a frozen tableau. The artist invited the students to brainstorm and come up with an idea or a concept for a human sculpture that represented their school and it’s identity. Some of the ideas that the students came up with were: the four animals of their school, the elements of their school, the sports that were played in the school etc. The students used their bodies to represent these ideas. These tableaux were presented to the other groups and refined with the input from the artists and teachers.

Moving Tableau: The next step in the process was to animate the frozen tableau and add sounds and words to it. This was done to enhance meaning and make to each of the sculptures cohesive. Each group was asked to write a poem describing their sculpture and to integrated it into their tableau. Additionally, they added sounds to the tableau, creating a soundscape that added more meaning.

Science, Social Studies, Art and Language Arts curriculum were used throughout as outlined in the previously mentioned lessons. The new draft curriculum for these four areas was used this year and applied to the BIG IDEAS project.

•   Mind maps as a tool for reflection after the field trip

Planning and conceptualizing sessions. The artist and the teachers planned the entire project, discussing the objectives, approach, workshop activities

Field trip to Human Structures, Giants and Love Your Bean

Workshop on soundscapes: The students explored how to create soundscapes

Workshop on tableau: The students were asked to come up with a sculpture to represent their school and it’s identity. This sculpture was created using their bodies in the form of a frozen tableau

The frozen tableaus were animated. Movement, sounds and words were added to the tableau to enhance it’s meaning.

Our experience with Biennale was wonderful! The artists, Christina and Anna, were music specialists and brought wonderful perspectives to our class. A focus we’ve been working on this term is risk taking – both trying new things in our work and behaviours such as participating in class. Anna and Christina provided the class not only with activities that challenged them but made them feel comfortable while doing it. I really appreciated the way in which they were able to incorporate our big ideas into music and movement. It really showed the students how one can convey meaning through a variety of ways, including our bodies!

The fieldtrip was excellent as well! Having studied sculptures before the fieldtrip, this was a great opportunity to put into play some of the things the student had learned. Being in the environment and experiencing it first-hand really gave the students a true sense of the art as well as its situation.

Overall, I felt my class developed new perspectives and respect for using alternate methods for show casing learning as well as developing their creative thinking skills.

Upon entering the classroom at Eagle Mountain, Christina and I were welcomed, supported and given a lot of freedom to explore our ideas with the children, which we were very grateful for. After hearing feedback from the class regarding the Bienalle sculptures they visited, Christina and I explored the idea of them creating their own living sculptures out of their own bodies and exploring the sounds that went with the sculptures. Their sculptures (body, sound, words) were to represent their home, their school and themselves. There were several different groups comprised of 5-6 students. They discussed and improvised until they discovered what their sculpture would be individually as well as collectively, expressing themselves physically, as well as through spoken word. We (Christina, Andrea, and Anna) were very encouraged and impressed by the way the students took direction, took risks, and were very creative with their ideas. We were also impressed with the fact that many of them may not have expressed themselves in these artistic mediums much before but were excited and open to trying. It was also interesting how some students were obviously naturally inclined to express themselves in these introspective and creative ways and we would hope that they would be encouraged to continue with this self-expression.

“I thought that having the Biennale artists come in was a great learning experience fro all of us. They taught us it was okay to make mistakes because in the end everyone is human. Each session Anna and Christina would say, “It’s okay to take risks” or, “It’s good you’re taking risks!” In my opinion I feel it made people comfortable.” – Lauren Carlin, grade 6

“I will say though I liked that Anna and Christina were sort of ‘dragging us out of our dark corners’ if you know what I mean. Like they wre experimenting and thinking outside of the box and I think that had a strong influence on me because I am naturally an iftrover and doing stuff in front of audiences is hard for me.” – Alex Itcush, grade 7

“I think this program has taken a blindfold off of me. I feel like I have a new set of eyes because this experience has taught me not only about art but about life. It has taught me to risk-take and not be worried about what others think and that my opinion is valued. Also teamwork. Pluslooking at something in a different perspective.” – Taryn Mills, grade 6