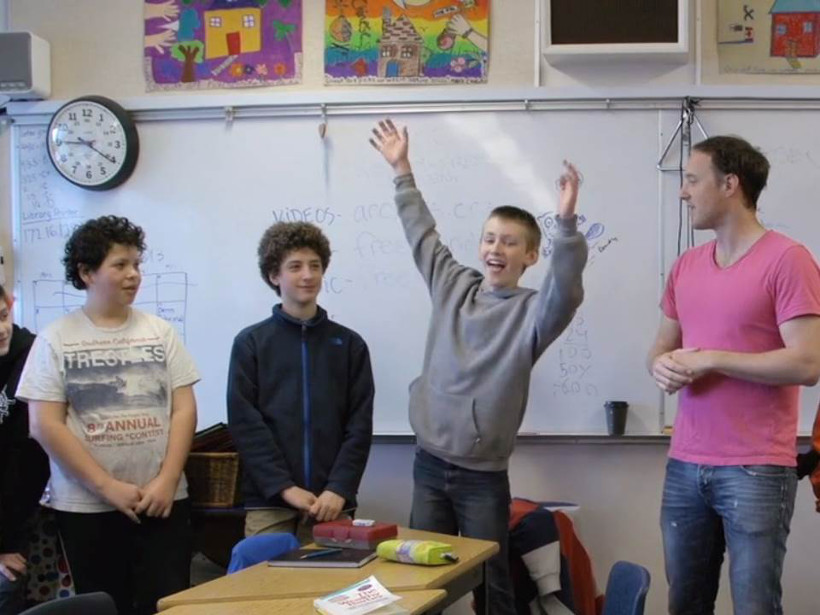 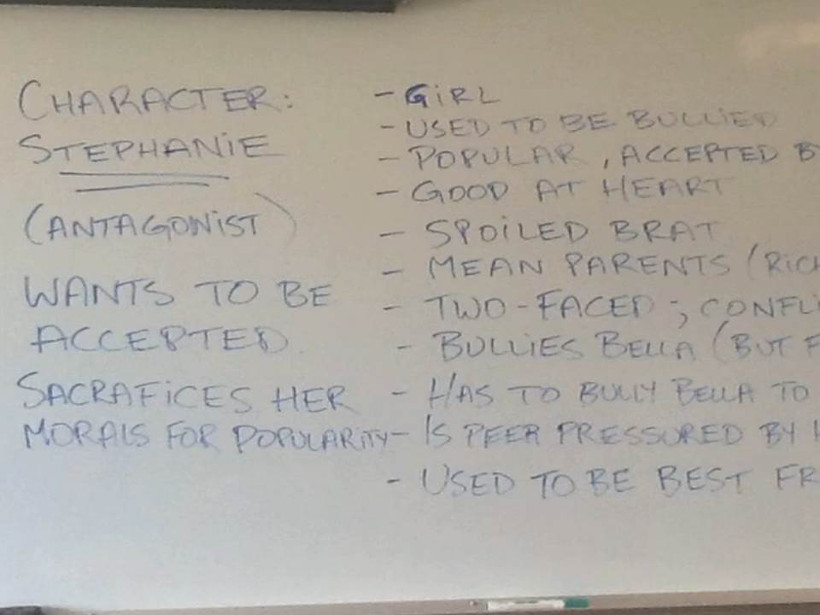 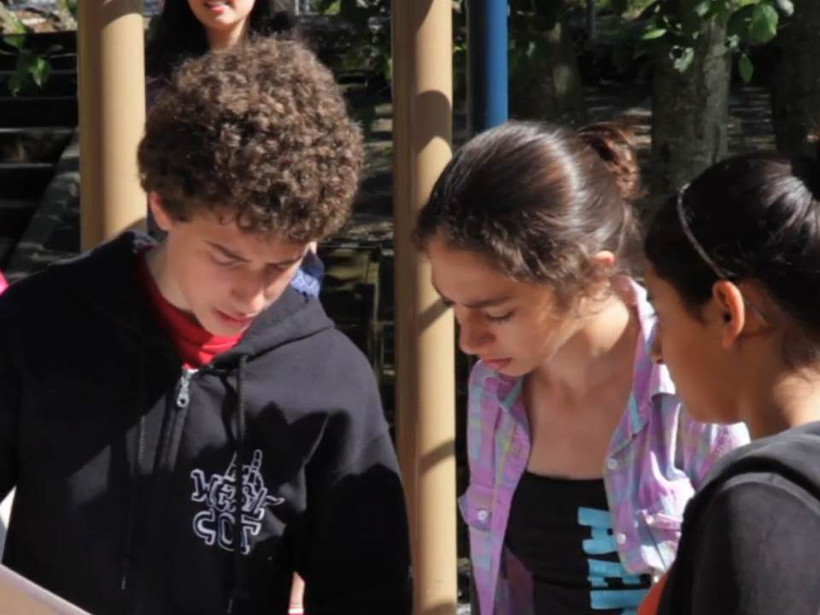 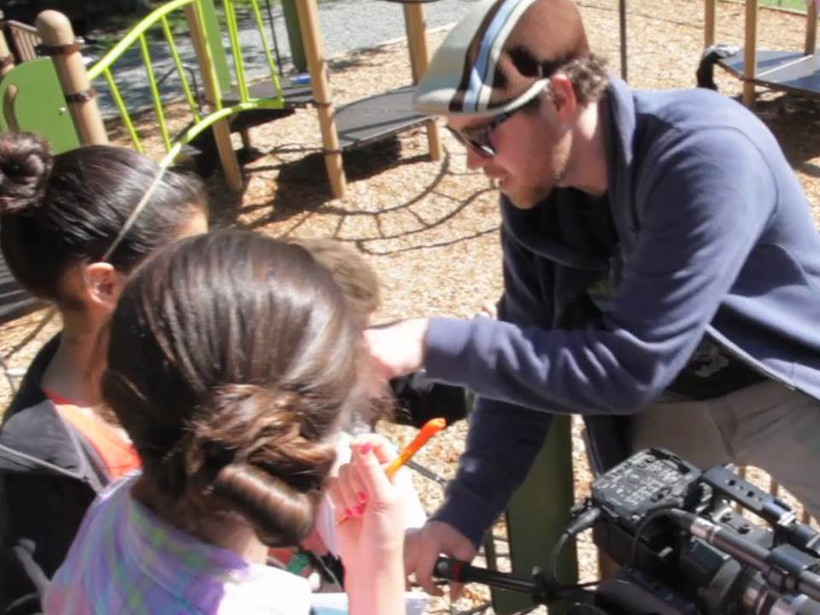 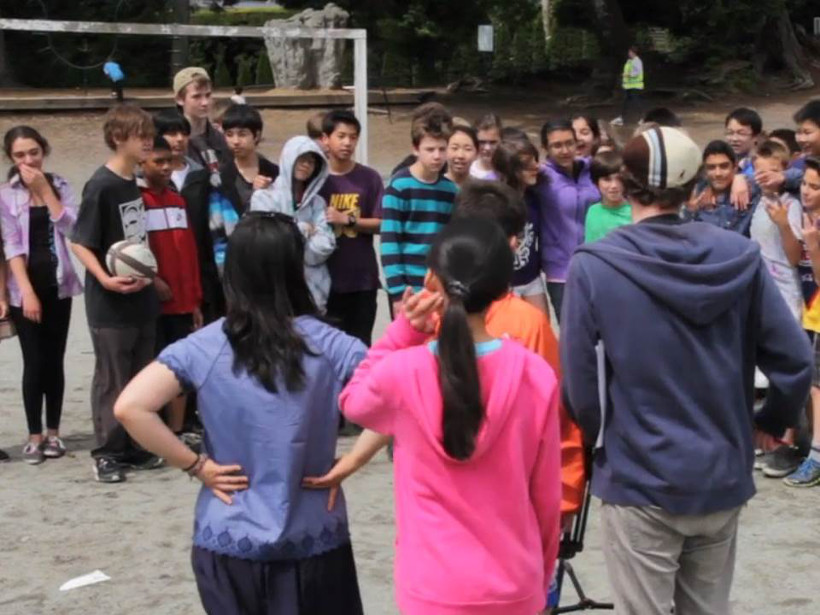 Vancouver Biennale Legacy: Echoes at Kitsilano Beach. Echoes is a series of chairs that are arranged facing different directions. Each chair a person sits in gives one a different perspective on the world. It is used as a metaphor to think about how to ourselves in another person’s shoes and see the world in different perspectives.

After the student visited Echoes, the theme of bullying emerged. The students were introduced with the BIG IDEAS: Be the Change by asking the question would they change if they put in themselves in someone else’s position? Guided by their classroom teachers, a spoken words artist and film/media artist, the students wrote a group poem and produced a short film to encourage taking action to overcome bullying and shared their message over the school website and with parents and other students during school assembly.

What would we change if we put ourselves in someone else’s position?

The project concept is to provide students options to express their message through poetry and/or film. After the student visited Echoes, the theme of bullying emerged, the students worked with a spoken words artist to write poems from the point of view of a bully and the point of a bullied resulting in exchanging monologues. The media artist then worked with a group of students to produce a silent film based on the narrative and characters of the poems. For final performance and sharing, the students performed the poems while showing the film on the background.

All students wrote poems on social justice topics specifically on bullying. Selected students interested in learning about film production shot a silent film based on the message of the poems the class has written in groups.

The students performed before the whole school and parents during year-end assembly to call for action on anti-bullying.The students showed the short film they have produced and performed the group poems that inspired the production. The film would be posted on the school website as legacy of their collective voice.

Jun: The short film with live poetry accompaniment was shared with other classes and parents during the year-end assembly and the film was posted on school website to inform students on the impact of bullying.

“We shot the film at school and the students had an amazing time with it. Some of them were acting and some of them played a technical part. We are very excited for the students to share and hope that it will ripple on and change many people’s perspectives.”

“My greatest takeaway from the experience with the Westcot students was a commitment to process. I thought it was remarkable how both teachers, the other workshop facilitator, Dan, and the students, were incredibly committed to pursuing an aesthetic experience that was wholly driven by the students. Though guided by the leaders, the content of both the poem and the video were created, practiced, and performed according to the students feedback. This process has a downside – mainly, time. It is much more time sensitive for the facilitators to give the students a subject, strongly guide their creative hand, and simply rehearse them according to their own aesthetic sensibilities. To hand over the reins to the students for all facets of this leads to more time consuming, improvised, sometimes circular, creative process. However, the take away, I feel is much stronger for the students. It is the difference between telling them they are involved in the creative process, and them experiencing the creative process. I am particularly happy that the students not only experienced the process, but noted they experienced it, as during their oral feedback sessions they mentioned how ‘hard,’ ‘rewarding,’ ‘different,’ and ‘interactive’ the process was. They were well aware it was something they had never experienced before, which seems the point of bringing arts to the classroom in the manner that the Biennale does.”

“The film production process was a huge team effort. There are so many jobs for so many different types of talent.”

“It was so cool to learn how to make a film. We thought we were going to film in order but we filmed at different places at different times. When you watch it may seem like the same place but in reality they are at far corners of opposite place.” 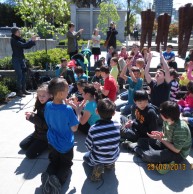 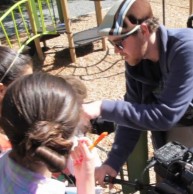 Westcot Elementary Grade 6/7 • Be the Change