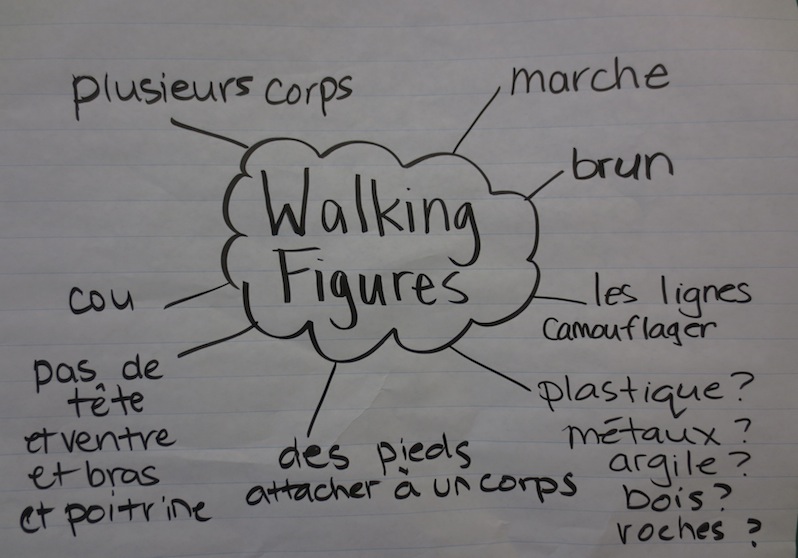 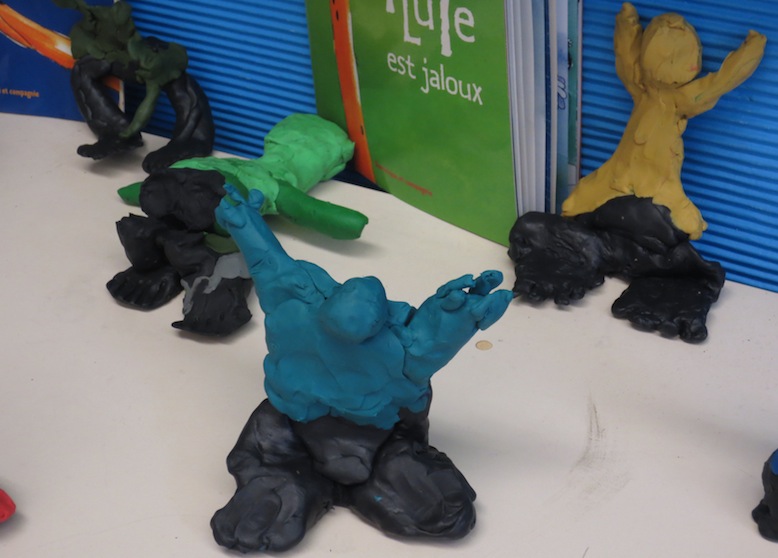 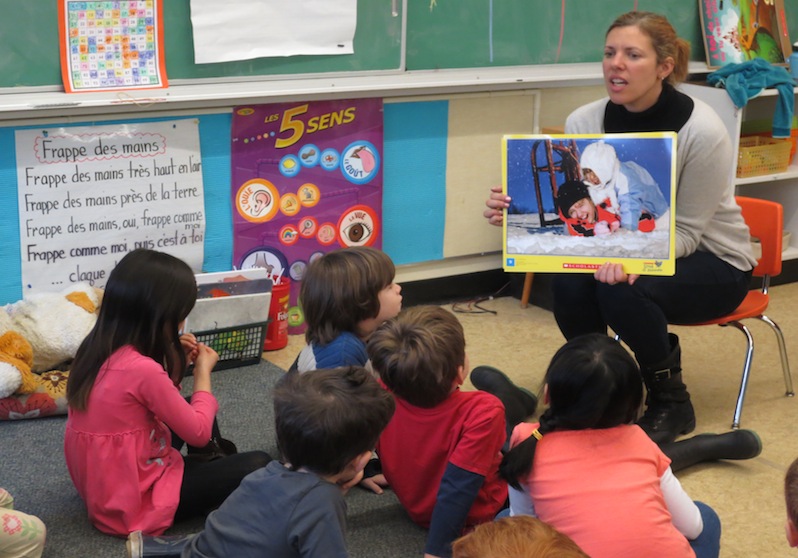 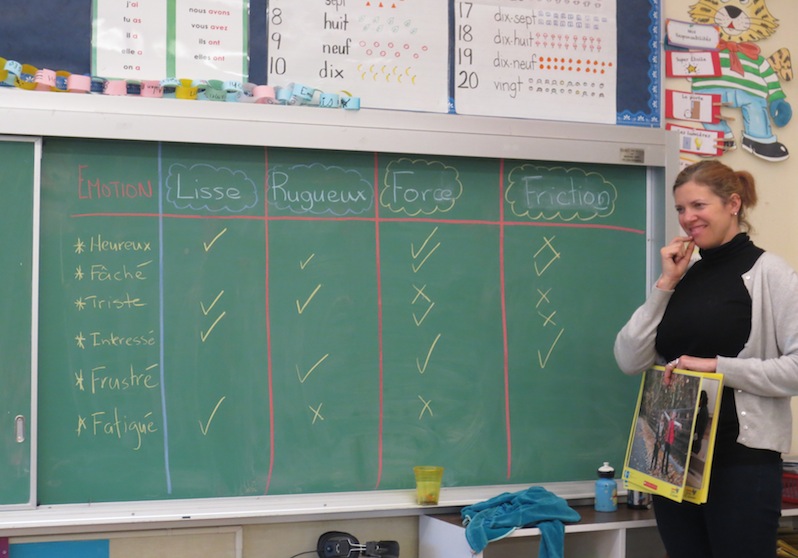 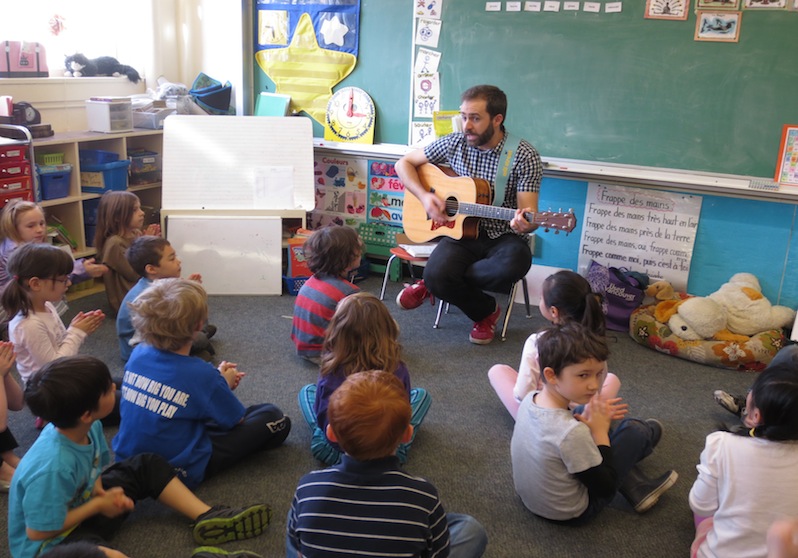 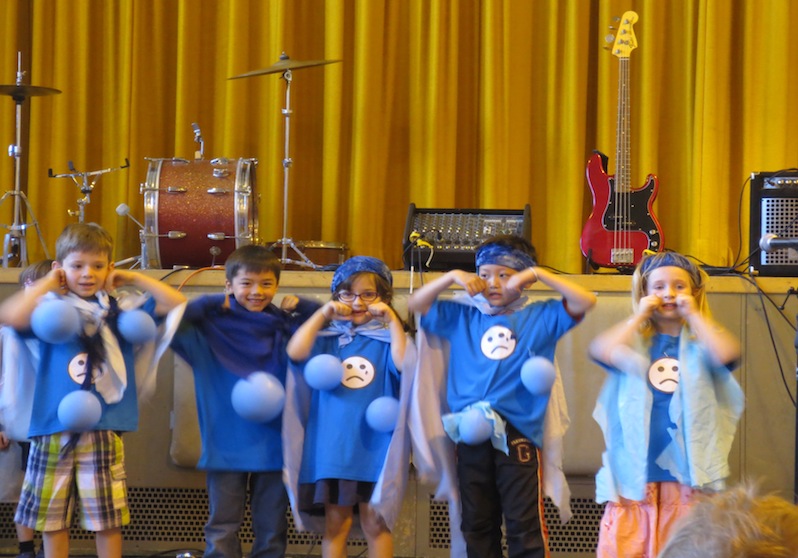 Vancouver Biennale Legacy: Walking Figures (Magdalena Abakanowicz, Poland) – Students connected their learning of force and friction in science exploring the textures of the figures and discussed the lack of interaction between the figures and their expressionless poses.

The curatorial theme of the 2014-2016 Vancouver Biennale Exhibition is Open Borders / Crossroads Vancouver. This project connects to this theme in many ways:

Students engaged in a cross-curricular project linking the concepts learned in their Science unit on force and friction with those being explored in social responsibility and emotional learning. Students developed their understanding of various emotions, in how they are expressed and how they can be understood, as they learned about the motivations (forces) and the resistance (friction) that they might experience in different situations. After visiting Walking Figures,

students extended their understandings experientially by making connections and conveying emotions through music and art activities. In bringing together their learning from across the curriculum, students developed personal insight in how emotional awareness can help them make better decisions and created a song with the help of their artist. They represented their thoughts and ideas even further by creating movements and costumes to go along with the song. They presented their learning in a final performance in front of their school.

Can a better understanding of the motivation (force) and resistance (friction) in a situation lead to better control of our emotions and enable us to make better decisions?

How can we understand the emotions of others and express our own?

Arts Education: Students engaged with art installations and learnt how to express emotion through visual art, making sculptures from playdough and creating costumes for their final performance.

Language Arts: Students developed their literacy skills by reading and discussing emotions through different books on the topic whereby they also strengthened their language skills in terms of idiomatic expressions and vocabulary. This helped them be better equipped expressing their ideas (in French) when coming up with the lyrics for their song.

Science:  Students completed a science unit on force and friction where they conducted experiments with hands-on activities with a variety of objects ranging from ping pong balls to magnets in order to learn about the impact of force and friction on the natural world.

The project began with a science unit on force and friction as student participated in hands on activities such as ping pong, moving magnets and sliding objects through a variety of surfaces to learn about force and friction. Students then connected the concepts they have learned in science to emotions, discussing force and friction in personal relationships by reading four books on four different emotions.

On a field trip to Walking Figures, the students connected their learning to the installations by exploring the textures of the figures and in observing their poses. Are they hard? Was their energy in their movement? Was their force or friction between them? Students observed that the figures were not interacting with each other and that the headless figures did not have any expression in their bodies. The students made music on the figures, creating different expressions and feelings for the figures and in this way exploring emotions through music (as well as science).

Furthering their inquiry in the classroom, students responded to images showing different interactions between people. Students discussed the emotions and communication situations represented and connected them their own life experiences. Students then created sculptures of the Walking Figures with play dough, adding heads to the sculptures in order to convey a variety of emotions and to bring love and expression to the stiff, emotionless figures.

Working with their artist, students wrote songs about their learning in science and emotional health. In preparation for their final performance, students worked on the visual representation of their song. For example, students thought about the actual material that the costumes they also came up with the idea that emotional ups and downs can be represented by inflated or deflated balloons attached to the costume. They also gave careful thought and consideration of the symbols on their costumes as well as what colours the costumes themselves should be. Afterwards, students performed their songs to the whole school in their smaller ’emotion’ group and as a whole for the chorus. They also shared the song and choreography by teaching their parts of it to a kindergarten, Grade 1 or Grade 3 class after the performance. For project wrap up and reflection, students related the project back to the Walking Figures.

Through learning about force and friction in science and in human interactions, students were able to explore how being aware of their emotions can help them make better decisions. They shared this learning with their school through a musical performance, conducting smaller performances for younger grades so that they might learn from their movement pieces expressing different emotions.

Planning session with teacher and artist

First of all I love the fact that the Biennale has taken on a project like this. I think it is an amazing way to connect students to art and artists in a very unique way that can expand their outlook on their community and the world. I was very impressed hearing about all of the projects that happened this year.

My project with Gabriela Novotny from l’École Bilingue was amazing. First off, Gabriela has an amazing ability to draw ideas from her students on pretty abstract concepts for 1st graders, and in French no less. I leaned a lot from her in this regard. The kids had amazing ideas and I think the piece we composed and presented together was excellent. It definitely exceeded my expectations. I believe we successfully met the mandate of connecting with one of the Biennale’s exhibits Walking Figures while also connecting to multiple parts of the grade curriculum (Science, Language Arts, Social Responsibility, Music, Dance…) Doing a project like this with young kids was not always easy, but I believe neither Gabriela, or myself shied away from this and really achieved something special with her class.

My most positive experience was the opportunity to explore, in depth, a concept and connect various curricular ideas through art, with an artist that has the skills and knowledge to really be able to help the students create something meaningful through the medium of music and song. 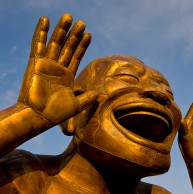 The Importance of Positive Relationships