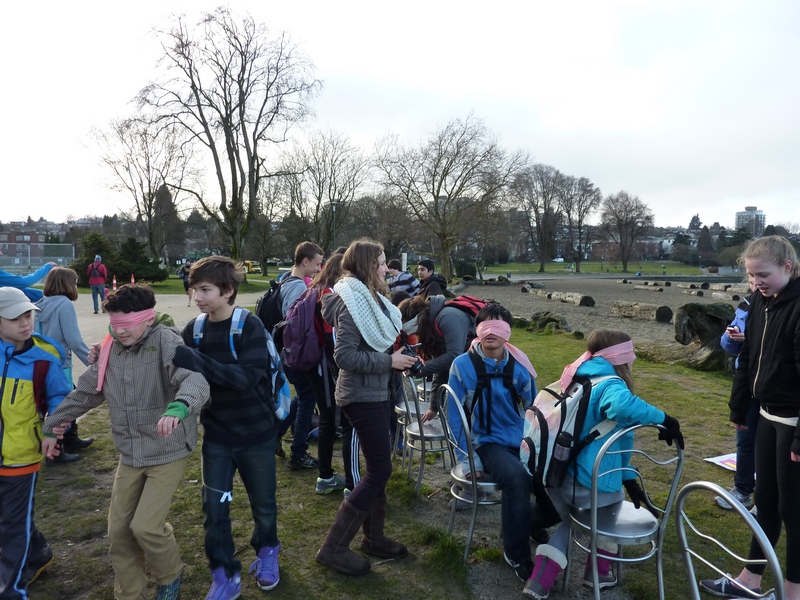 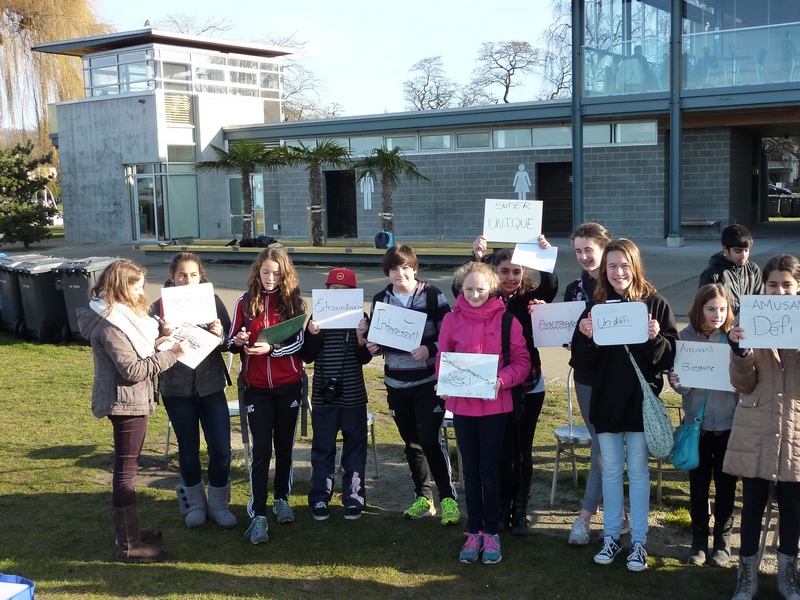 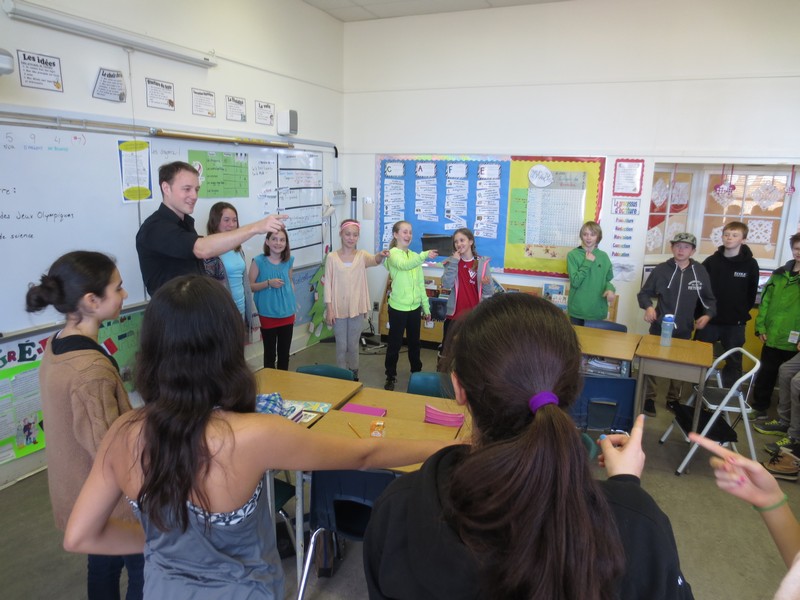 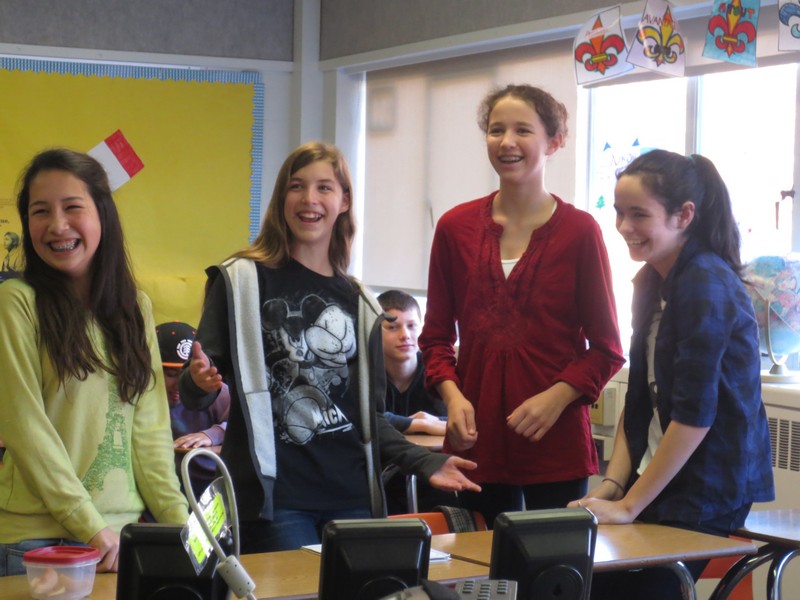 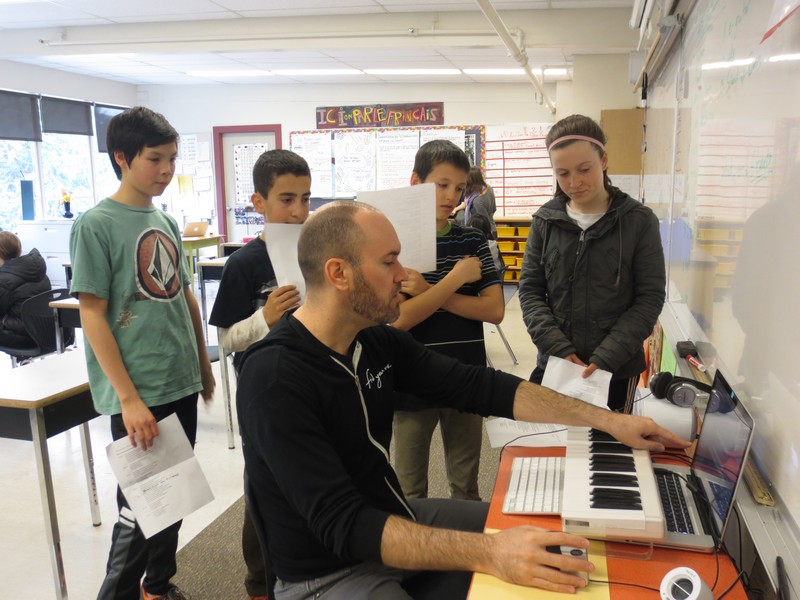 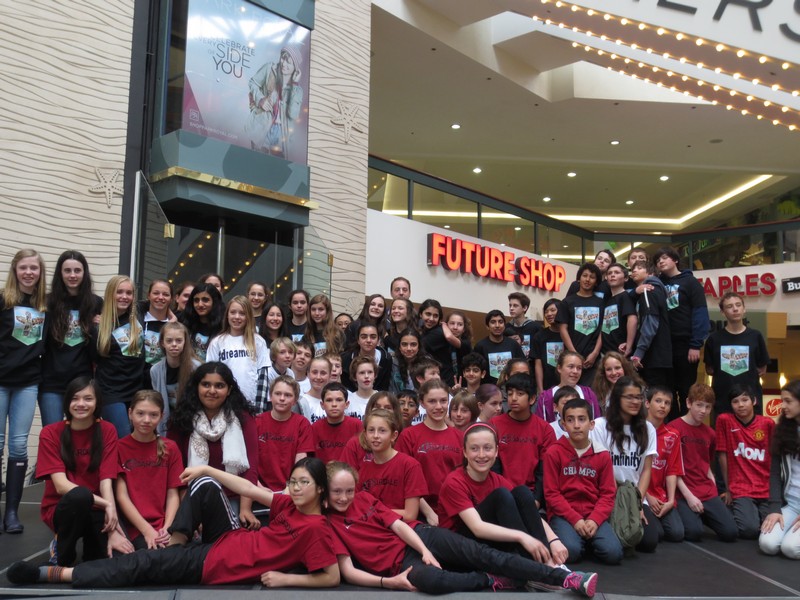 Two classes of grade 6, 7 and one class of Grade 8 students

Vancouver Biennale Legacy: Echoes (Michel Goulet, Canada) – Drawing an analogy from the line and form of the artwork, students discussed in their groups the use of lines in portraying meaning and the inter-relationship of environment and communication.

The project speaks to the theme of the 2014-2016 exhibition Open Borders / Crossroads Vancouver in many ways:

Other Source of Inspiration

As recommended in the West Vancouver French Immersion (FI) Program review conducted on February, 2013, this collaborative project aims to create an inclusive community involving teachers and students from the 3 FI schools. On a field trip to Echoes, students from the three schools began to inquire into the topics of communication and transition together and explored how lines can be used to communicate across boundaries. The students investigated how different cultures have used lines to communicate from past history through to present day use of social media. The students reflected on their identities as French immersion students, investigating ways to create better lines of communication with their peers and the French immersion community at large. Facilitated by their teachers and musician/spoken word artist Brendan McLeod, the students expressed their thoughts through writing and performing a series of songs in French at the annual West Vancouver School District Art Festival to the public as a connected French immersion community.

Using lines of communication in building community spirit and identity

How can the concept of lines enhance communication of ideas across boundaries?

Information Technology: Using padlet and TodaysMeet as a digital communication and collaboration tool, students from the 3 schools responded and view responses to a daily question posted by the teacher. The questions cover student identity, reflection on the process and performance. Selected student responses were captured and referenced throughout the project.

Language Arts: Text Talk: how could our forms of communication have affected other generations in the past? How will it affect generations of the future. Use Cuban Missile ‘Hot Line’, to address the importance of communication. Discuss bi-lingualism add a component to identity and they create emblem what makes them who they are.

Science: Students experienced a scientific application of lines in communication for electricity currents when they build battery units.

Social Studies: Investigate how Greek communicated through line and how communication and culture has changed over time due to technology and the use of line in map making.

Visual Art: Sentinel students were challenged to create 2D image using lines and logos from all three schools to create design for their performance T-shirt.

The project idea originated from a BIG IDEAS Digital unit plan titled, Lines of Communication. Students visited Biennale legacy artwork Echoes where they began their inquiry, exploring their preferences on open or closed lines of communication by doing a survey. Students got paired up by pulling out strings from the knot to find out the names of their buddies. Drawing an analogy from the line and form of the artwork, students discussed in their groups the use of lines in portraying meaning and the inter-relationship of environment and communication. Finally, students were challenged to reflect on how their own understanding of themselves changes the meaning of line and form. Students created a visual photo web showing their shared connections through lines as the starting point for a project bulletin board.

Using digital collaboration tools: padlet and TodaysMeet, students shared ideas in groups on developing lyrics of their songs. A virtual communication network connected the 3 classes on real-time while students posted their responses to a daily question initiated by the teacher. Selected student messages were captured and referenced throughout the project.

Song writing was the chosen artistic form of creation for the collaborative project. Drawing from their field trip experience and inquiry into how the concept of lines can enhance communication of ideas across boundaries, the students wrote lyrics and created choreography to express their feelings and personal experiences. Guided by French speaking songwriter, Brendan McLeod and assisted by musician, Gordon Cobb, the final song speaks to a unified theme on communication while each individual class voiced their perspectives and discovery on the BIG IDEAS. The collaborative project fostered a sense of French Immersion community expressing that lines of communication can be developed across languages, experiences, locations and ages through music.

Sentinel students extended their creative expression to the design of emblems to represent their identities as French immersion students in Canada. Cedardale students extended their inquiry on the boundaries of communication. The class reviewed the importance of Canadian Charter of Rights and Freedoms and the protection it offers the Canadian citizen and made comparison to other countries. Pauline Johnson students debated on pros and cons of contemporary methods of communication through social media. The students also created mind maps and an online web of project photos to visually represent lines of connection among the schools.

Students performed their songs as one group to the general public at the Lighthouse Art Festival characterizing the beginning of a collaborative French Immersion community across the schools.

The three schools hope to continue with an annual collaboration project and aim to initiate “les jeux de la Francophonie” for a day, where students create and share games related to their French cultural identity to promote open lines of communication across varying levels in French immersion classes.

• Field trip to Echoes to begin the collaborative inquiry process

• Learned about song writing and the elements of a song

• Practiced vocal projection and how to talk in a sequence

• Discussed the Biennale artwork and how it fits into the guiding question: Lines of Communication as inspiration for their song writing

• Cedardale students began inquiry on the boundaries of communication. The class reviewed the importance of Canadian Charter of Rights and Freedoms and the protection it offers the Canadian citizen and comparison was made to other countries.

• Cedardale students research into the Chinese head tax and its impact.

• Cedardale students created their own Charter of Rights.

• Students participated in online sharing of ideas through padlet and TodaysMeet

• Sentinel students discussed what it means to be a French immersion learner, how they communicate and the challenges and opportunities of their program

• Examined impact of censorship and closed lines of communication

• Cedardale students inquired into how communication is critical for healthy relationship

• Cedardale students explored and analyzed instances of communication that are understood vs not understood.

• Students completed writing exercise based on writing prompts including:

• Imagine a situation in which you should have listened more

• Imagine a life where you cannot speak or listen

• Imagine a life where you have no phone

• Getting ready for performance and design choreography

The overall end performance was fantastic for the kids and parents to see their hard work and learning come to fruition. The artist provided the expertise that was required and was very open to our ideas, yet came fully prepared and knew what our kids were capable of achieving in such a short period of time.

I think the work done by the French Immersion students at Pauline Johnson, Sentinel, and Cedardale was very strong. They worked very hard, in a short time frame, in a second language, to write, perform, and choreograph their own songs. I thought their final performance was well-executed and well-received. Some of the strengths of the project were: good communication between teachers about guiding objectives and overall goals, strong work by Gordon as the music engineer, a sense that the students “owned” their material – I really got the sense that they understood that from beginning to end it was their work, not mine, and I consequently saw an increase in the responsibility and enthusiasm they had for the work. Some difficulties: short time frame, due to my schedule, but also the school not being able to commit their timetable well enough in advance. Also, I found that while the goal was to increase collaboration between schools, there was no time in which all three groups of students could meet, which hampers that objective, and also makes it harder to create a final performance. In the future, it’d be great to get all the french student communities from different schools creating together, as I really think that would make for an even stronger project next year. ​

I learnt that we really can communicate without words and that we need communication for survival and in order to have a social life.

I liked the Biennale project a lot. I liked it when we created a song because it was fun to share our ideas with Brendan. I also liked seeing the students from Sentinel and PJ. But my favourite part was making the background music with [Gordon].

It was really cool to make our own music with Brendan McLeod and Gordon.  It was cool because I’d never done anything like that before. It was a really fun experience. I learnt a lot while doing the Biennle project. I learnt that there are many people who like the same things I do. I also learnt how to make music (verse, chorus, bridge etc).

I thought the Biennale project was really fun. I’d like to do it again! 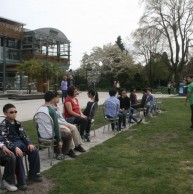