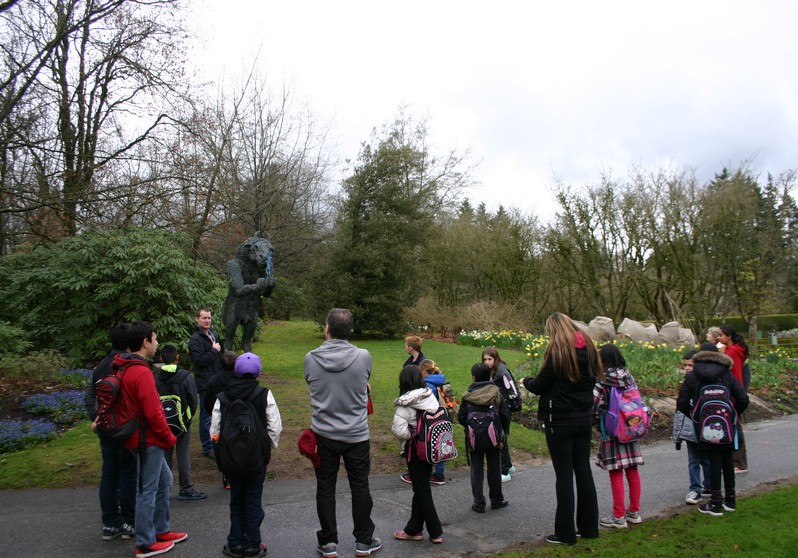 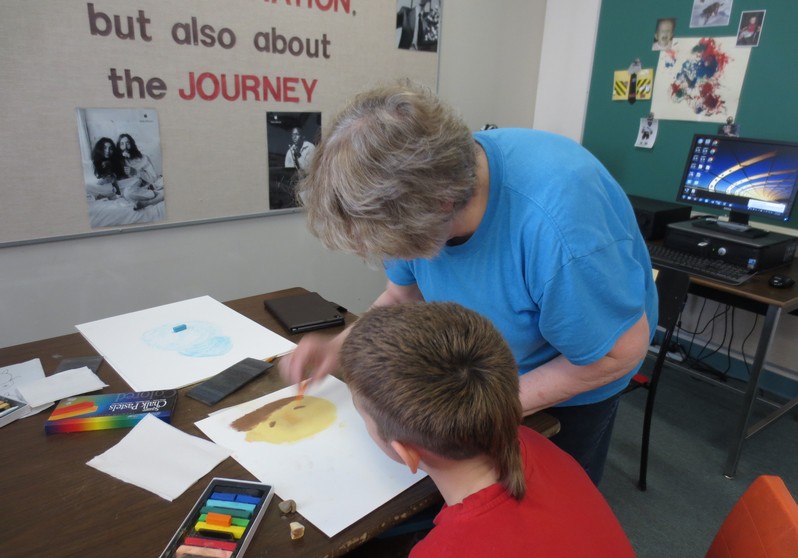 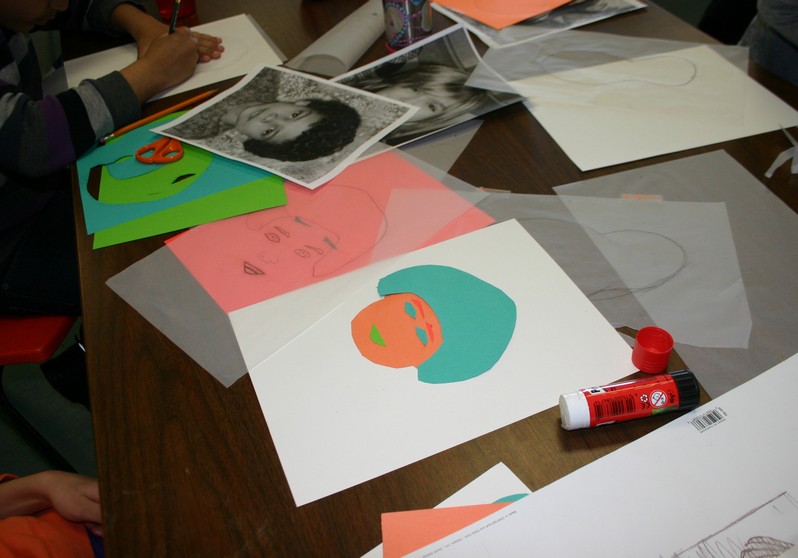 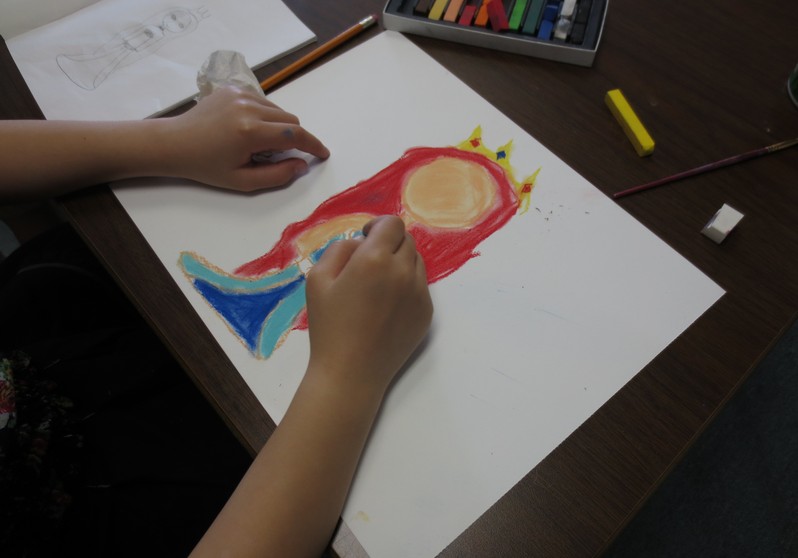 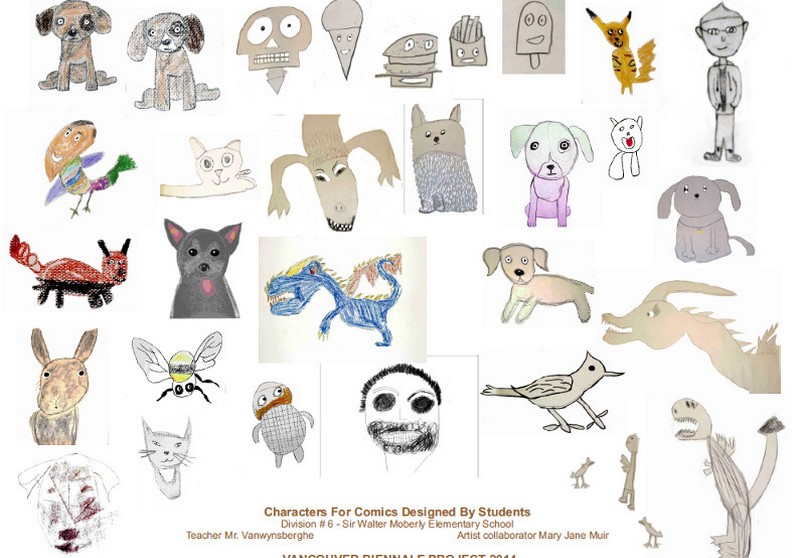 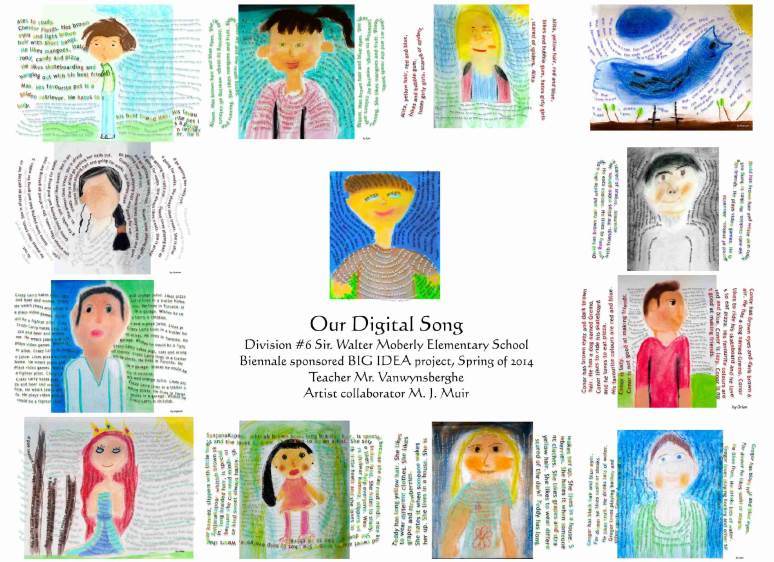 One class of Grade 4, 5, 6 and 7 students in the Journey Program, an Extended Learning Assistance Class

How can arts be used as a visual language to express one’s identity? What stories do we tell ourselves that limit us as learners? How can narrative help to extend and reshape our boundaries?

Vancouver Biennale 2009 – 2011 Exhibition: Minotaur and Hare (Sophie Ryder, England) – Students discussed the story behind the sculpture, reacting to the way in which the figures relate to one another and present a narrative.

The curatorial theme of the 2014-2016 Vancouver Biennale exhibition is Open Borders / Crossroads Vancouver. This project connects to the Exhibition Theme in many ways:

Students engaged with self-portrait making and storytelling as a means of discovering more about themselves as learners. Drawing inspiration from Minotaur and Hare, students discussed the ways in which engaging with narrative can provide insights into the personality of oneself and others. Working with a visual artist, students learnt about different styles of illustration, creating self-portraits in a variety of styles to reflect on their own personality and the different methods of presenting a character. Furthering their inquiry of presentation and self-reflection, students created fictional characters for a short story and comic strip that mirrored their identity as learners with learning disabilities. By writing short stories, comics and poetry inspired by their growing self-awareness, students learnt about the borders they create for themselves in school by gaining an understanding of how they view themselves as learners and individuals in their school and community.

Arts Education: Students learnt how to communicate through art in a variety of mediums including pastel, cut outs, comic book images and photography. Reflecting on their own personality, students were challenged to create self-portraits that express their identity.

Language Arts: Students wrote comic strip scripts, learning about character traits and ways to communicate with a combination of text and image. They then authored a creative short story that described their values and beliefs, using a tone/mood to convey the important theme of self-knowledge and identification.

The project began with an introduction to the artist and a reading of the book she wrote with her teenage son titled Albert’s Old Shoes. Inspired by the story, students discussed feeling excluded and reflected on what it means to have a learning disability. Students were introduced to different types of graphic novels and styles of illustration and were encouraged to pick methods and animators that they preferred. Students drew characters from different books, learning about how to draw the different personalities of fictional figures. Using these skills, students created a variety of self-portraits, reflecting on their identity as learners, building their self-awareness and thinking about the different ways in which they can view and present themselves.

On a field trip to see Minotaur and Hare, students silently walked around the sculpture, looking at it from different angles. Students where then asked to reflect on what questions came to mind when viewing the sculpture and these were recorded into an iPhone. Students discussed these questions as a group, exploring the placement of the installation, the materials chosen and the story behind the two figures.

Inspired by the narrative of the installation, students continued creating characters and self-portraits through illustration as each was given the task of creating a character for a short story. Workshops were conducted in class on character development, as students were challenged to go beyond the physical nature of their character and to develop their personality traits. Students created short comics of their character, revealing their character’s personality through image and text. Reflecting on their own identity, students incorporated their own personality traits and personal challenges into their fictional character’s story. Relating to Minotaur and Hare, workshops were conducted in class on the elements of a story and story structure. Given the metaphor of a rollercoaster ride to describe the rise and fall of a story, students were encouraged to create their own metaphors for what makes a good story.

Students presented metaphors and video examples of story structure to the class, concluding that a good story has meaning that we can learn from stories and gain insight into the mind and personality of the writer. Using their comics, metaphors, character study comics and illustration skills students created stories that address how they view themselves, how they feel their family and community view them, gaining self-awareness of their identity as learners.

View this enchanting ebook showcasing the artistic creations by the Walter Moberly students and their creative journey using arts to visually express their identities.

This inquiry around art provided an opportunity for the students to author their own story about what it is like to be a student with learning disabilities in a meritocratic education system. Students gained self-knowledge and were able to share their emerging voice with their class, family and school community.

“Mary Jane’s art inspired me because she used different ways to draw characters and this helped to imagine what my character might look like.” Orion P.G.

“Mary Jane taught me how to use different tools to make art and this made me feel excited.” Alita V.D.

“Mary Jane made me interested in art because she taught me how much fun art can be.” Hana Y.

“Mary Jane taught me not to be a perfectionist and understand that I wouldn’t progress if I just sat there and tried to make everything perfect.” Jagnoor M.

“You have brains in your head. You have feet in your shoes. You can steer yourself in any direction you choose. You’re on your own, and you know what you know. And you are the guy who’ll decide where to go.” Dr. Suess

At the beginning of this process it seemed to me that I had lost sight of my learner’s ability to navigate their world and create meaning for the self: I had effectively written their story and created characters who were angry for being labelled as having a learning disability, unable to function in the regular classroom and, ultimately, being asked to attend a district program. I had scripted stories of anger and frustration. What I failed to realize was that my learners were capable of so much more.

My participation in the Vancouver Biennale Education Big Ideas and collaboration with artist Mary Jane Muir allowed me to deepen my understanding of how my learners feel about who they are and how they see themselves within the education system. Yes, they struggle, but their characters and stories reveal learners who share the same hopes, fears, tastes and ideas and learners outside room 215.

It was Mary Jane’s essence as an artist that disarmed my learners and led them to include the words artist and writer in their biographies.

As the artist collaborator my goal was to enable the children to feel empowered by treating their input with respect and care. It was a privilege to work with this class of enthusiastic students. They threw themselves with gusto into whatever I brought to the workshops. They progressed from feeling afraid to set a pencil to paper because of insecurity and worry about making ‘mistakes’ to a swaggering confidence in knowing they could feel free to let loose with their own ideas once they have a pastel in their hands. While I know their skills with writing will develop as they grow older, I hope their new found visual dexterity will enable them to express their thoughts in new ways.

At the beginning, the teacher and I thought we knew where this exploration would take us but at the end we were at a different place, yet the whole process was well worth doing. To see the pride and joy on their faces and in body language was well worth the effort.