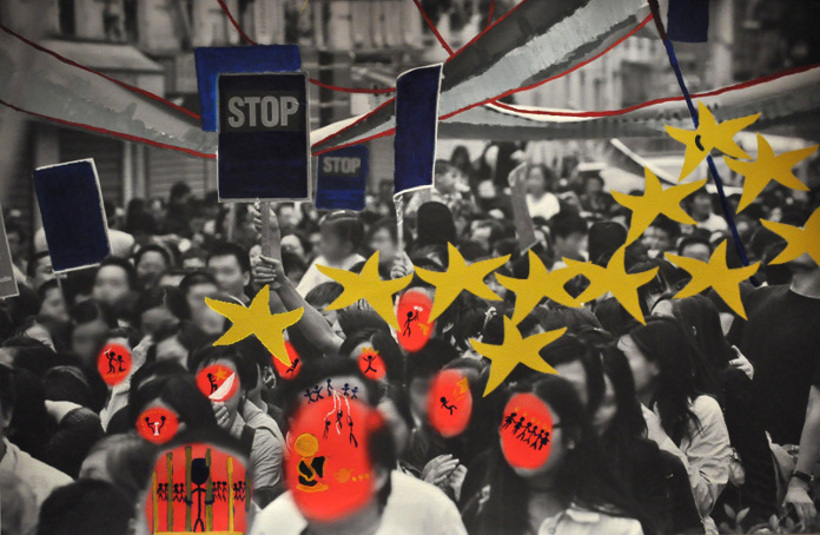 This unit of inquiry is not a recipe book but rather a launchpad to inspire new BIG IDEAS. We encourage you to use and/or modify one, or several of the BIG IDEAS below. Adapt it to the grade/ ability level of your students.

Individual lives can effect change in the face of seemingly insurmountable obstacles.

How does Ai Weiwei’s work merge the role of artist and political activist?
How does censorship affect what the media reports and what citizens learn?

Choose or devise practices to encourage students to be open to new experiences and ways of thinking in your classroom. For example, the MindUP in-school program.

• Introduce the Theme: Present the Enduring Understanding and Guiding Questions using vocabulary that is appropriate for your grade level.

• Introduction to Sculpture and Public Art Unit Plan for information on how art has evolved over time and the unique experience sculptures and/or public art brings.

•  About Artist and Artwork (PDF)

•  Make a visit to F Grass (Ai Weiwei, China) and encourage students to freely explore and interact with the art pieces individually and in groups OR

• Background Knowledge about the artist:

1/  Using a KWL worksheet, ask students if they have ever heard of the artist Ai Weiwei and to write down what they know about him.

2/  View  Sept, 2013 CBC National Canadian broadcast exclusive  (13:14 minutes) as an introduction to Ai Weiwei as a person, his work, and his politics and discuss what new information they just learned.

Timeline and brief history of China in the 20th century (Chinese Civil War, The Nationalist Movement, Mao Zedong and the Great Leap Forward)

“I don’t want to be part of this denying of the reality. We live in this time. We have to speak out.” – Ai Weiwei

“Typical Chinese critics are mild but skillful. They don’t directly criticize the Communist Party or government.

But Ai Weiwei is different. He uses the most aggressive words to point out society’s dark side.” -Chen Danqing

In groups, students select and research one or several of Ai Weiwei’s artworks (see listed sample options). Treating it as a piece of Historical Evidence  you think is the intended audience? What was going on in China at the time that this art was created that might help us interpret it? What materials has Ai Weiwei used? Is there special significance to these materials? Does this work challenge government authority?  If yes, what symbols or metaphors does Ai Weiwei use to accomplish this?

2/  By using Aurasma on their posters the classroom can be transformed into an augmented reality museum.  Using these posters, students stage and exhibition of Ai Weiwei’s work for their peers, teachers, administrators and parents. This short YouTube clip shows you how to use Aurasma. Here is what Aurasma looks like at the Grammy Museum.

1/  Watch the BBC News clip of the events occurring during the night of June 3-4, 1989 and solicit student reaction to the video. Explain that the aim of this inquiry is to uncover the sequence of events that caused the events of June 3-4 1989, known as the Beijing Massacre, the Tiananmen Square Massacre or the Six Four Incident.
2/  Geography and Significance: Teacher shows a photo gallery of Tiananmen Square as it is today and reads this description of the square by Canadian Jan Wong in the Resource Guide (this web site by the Long Bow Group provides an interactive tour of Tiananmen Square with additional links)
3/  Classroom discussion:  What is the significance (historical, social, cultural) of the geographical placement of Tiananmen Square in Beijing?
4/  Introduce/revisit the concept of Cause and Consequence and/or view the following Cause and Consequence Video.
5/  Group analysis delving into the sequence of events of the Tiananmen Square massacre and ranking them according to their perceived influence for presentation to the class (using a digital timeline generator like Capzles* or larges sheets of paper).
6/  Groups might also answer the following questions as part of their presentation to the class: What do you think were some of the short-term and long-term consequences of the Tiananmen Square Massacre?  Were there any unintended consequences?  If so, what were they? How might this event have been prevented? What significance does the event have in China today?
7/  Class discussion: The Chinese Government later claimed that violence began as a result of a minority of demonstrators attacking the troops. Do you think this is accurate?  Why are exact casualty numbers unknown? Why is there such a difference between estimates?

1/  Watch video footage of  “Tank Man” the day after the Tiananmen Square Massacre
2/  Introduce/revisit the concept of Historical Evidence and/or view the following video on Evidence and Interpretation.
3/  Group research on the video: When was this video taken? Where was it taken? Who was the videographer?  What was going on in China when the video was taken that might help us interpret it?  What things capture your attention in this video?  Why do you think this video was taken?
4/  Class discussion of the results of the group research.
5/  Teacher introduces these three final questions for groups to work through and share: Does this man’s courage represent a student movement defeated or resolved?  These pictures, along with others of the massacre, were beamed around the world. How, do you think, people reacted to them?  What is the historical value of these pictures and footage?  Are these images available for Chinese citizens to view on the Internet today?  Why or why not?

• Freedom in China Today: Part I:  Human Rights – How are human rights at risk in nations ruled by communist regimes?

“If there is no judicial independence, everyone is put in jeopardy; if there is no free speech, every single life has lived in vain.” @aiww

• Freedom in China Today: Part II:  Censorship of the Press– How censorship affects what the media reports and what citizens learn?   How is Media “Free” or “Not Free”?

1/  Students inquire: What websites are blocked in your school? Why are these websites blocked? Do you agree or disagree with this? Why would a government want to block information?  Is there a difference between monitoring information and blocking information?

Use a Canadian search engine such as www.google.com and enter “Tiananmen Square”. Each group is to record answers to the following questions:How many links can be accessed by this search? Scan through the first three sites. What seems to be the content of these links? What words are repeated?

Use a simulated Chinese search engine such as Google-China’s website www.google.cn. (Chinese characters may be displayed as squares) and enter “Tiananmen Square” in the search box. Each group is to answer the following questions: How many links can be accessed by this one search? Scan through the first three sites. What seems to be the content of these sites? What words pop up? What sites pop up when using Google-China?

Group discussion: How does the content of these search pages differ? Why do you think the content differs?

Students to take turns reading and discuss the following points:  Why are accurate numbers of casualties of the students protesting at Tiananmen Square difficult to determine? Why do you think Google-China’s search engine and the Chinese government block access to sites like this BBC story?  To what extent do you think that the BBC article reflects a bias?  Discuss the meaning of the  following quote from the documentary  Ai Weiwei Never Sorry:

“If it’s not publicized, it’s like it never happened, right?” – Ai Weiwei

1/  Class begins with an investigation into China’s Freedom of the Press Rating by the non-profit organization Freedom House.
2/  Class discussion on factors that contribute to this rating.

3/  Students investigate the following questions: What make the press “free.”?  What is the relationship between political freedom and a free press?

4/  Students examine the Freedom House Map of Freedom of the Press and inquire into other countries that do not have a free press.

5/  Introduce the class to The Empirical Analysis of Internet Filtering in China Study*.

Group inquiry into the following questions:Why do you think the Chinese government restricted and continues to restrict access to some sites pertaining to “equality,” “democracy” or “dissidents”?  What other terms do you think the Chinese government would censor? Why? Are there any search terms that the Canadian government might monitor or censor? Identify these terms and explain. Is a censored Google in China better than no Google? Explain.

7/  Groups are tasked with blackening out words in the BBC article “On This Day: 4 June 1989” that the Chinese government would find objectionable. After censoring the article, students assess how censoring the information affects their understanding of the events and evaluate its impact on controlling information.

*In 2002, researchers at Harvard University tested Google Internet access in China to determine which search terms were frequently blocked. The researchers checked to see if the search terms typed in Chinese locations would connect to the same sites that a Google search in the United States would yield. For example, when the researchers typed terms such as “equality” or “democracy china” into Google’s search engine in the United States, they were linked to media organizations such as the BBC or Time Inc. or to universities such as Stanford University or Columbia University. In China, these same sites were frequently blocked

How would you communicate your ideas as an artist if you could not leave your country?

“Blogs and the Internet are great inventions for our time because they give regular people an opportunity to change public opinion.” – Ai Weiwei

Due to Ai Weiwei’s political activism, the artist’s physical movements continue to be restricted by the Chinese government.

1/  Watch this newscast  that details the background to Ai Weiwei’s music video, where reflects on his time spent in prison.  Discuss student reactions to the video. Show students this second video interview recorded in Ai Weiwei Beijing studio on Oct. 9th, by Evan Osnos of The New Yorker.  Here Mr. Ai explains what it is about communicating via the Internet that he finds “so beautiful”.
2/  Students create a classroom blog or website where they showcase some of the following creations where students respond to the question:  What does freedom of expression mean to you?

• Teacher and students can reflect on their entire learning process by revisiting the Guiding Questions.
• How did the unit of study open inquiry, create cross–curricular learning opportunities and/or apply learning to real life situations? Has this unit of inquiry changed your opinions, values and worldview? In what ways, if any, has it helped you grow as a learner?

• Language Arts –Creating Graphic Novels and/or Making Stories
Create a fictional graphic or non-graphic story inspired by the themes of Ai Weiwei’s life/art. Students can use any of the following tools or other tools they are familiar with:

For a comparative review of the strengths and weaknesses of these options; watch this video on a student’s perspective.

• Fine Arts: How did Duchamp’s ready-mades, Warhol’s pop art, and Johns’ abstract expressionist paintings influence Ai Weiwei’s artwork?
As a young man, Ai Weiwei moved to the US to attend the Parsons School of Design in New York City.  He lived there for twelve years and discovered the artists who would become his main artistic influences: Marcel Duchamp, Andy Warhol, and Jasper Johns.  In groups, students compare and contrast 5 of Ai Weiwei’s works of art with those of  Duchamp, Warhol and or Johns noting similarities and differences. Groups present their findings to the class using a video-creation platform like Animoto. (Educators can get a free Animoto account here) 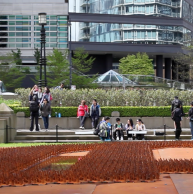