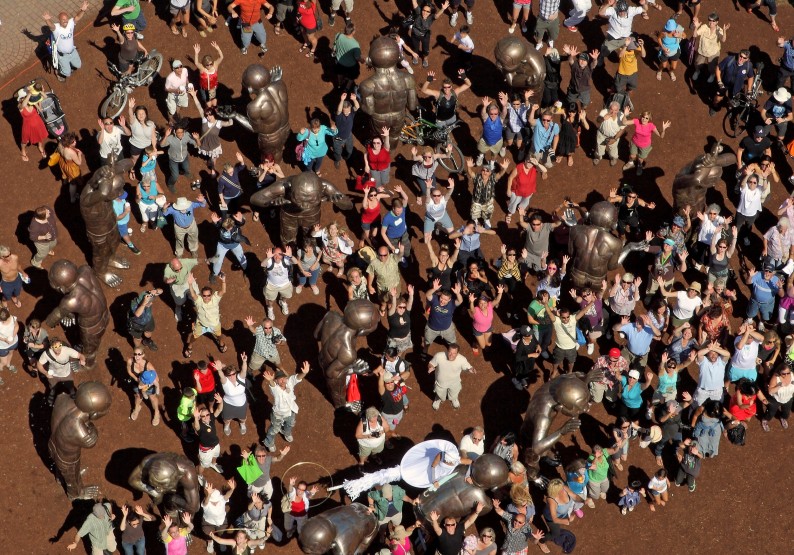 The third Vancouver Biennale comes to a close this July. The first exhibition ran from 2005-2007 and introduced memorable artworks Echoes, 217.5 Arc X 13 and Engagement to Vancouver. Yoko Ono was a featured artist and the controversial Device To Root Out Evil was installed in Coal Harbour.

The Biennale returned in 2009, just in time for the Winter Olympics. The much loved A-maze-ing Laughter was first installed at English Bay. Again controversial art found a temporary home at the exhibition with the installation Miss Mao Trying to Poise Herself at the Top of Lenin’s Head. Current Biennale artists Toni Latour and Konstantin Dimopoulos made their Vancouver Biennale debut at that exhibition and the late Hema Upadhyay created her beautiful matchstick chandeliers.

The 2014-2016 Vancouver Biennale has seen Ai Weiwei’s politically charged F Grass – A message of resilience directed at China from our democratic shores, gain international recognition. The artist was granted the freedom to travel after years confined to house arrest less than 6 months after the artwork was completed. We also launched our international artist residency program and introduced over 40 rising stars of the art world to Vancouver and Squamish. Vik Muniz temporally brought the Wolf back to Squamish and urban art became part of the landscape at Granville Island when Osgemeos painted the Giants.

What are your memories of the Vancouver Biennale? Share them with us on Social Media.